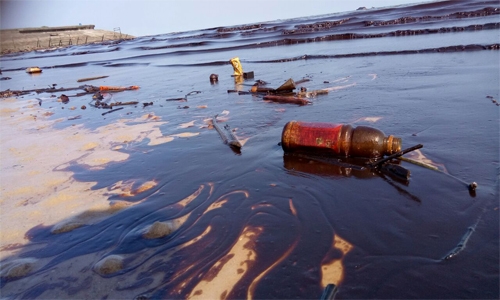 The National Space Science Authority (NSSA) and University of Bahrain (UoB) have signed a Memorandum of Understanding on the use of an electronic application enhanced by artificial intelligence and algorithms to locate oil spills in the Arab Gulf region.

University of Bahrain researcher Dr Fatima Abdul Qadir Al Balushi is implementing the project by designing an application which is using satellite images and data obtained from remote sensing satellites to detect oil spills. Assistant Professor at the university’s College of Information Technology, Dr Al Balushi is motivated and optimistic about the project.

“Working with the authority is interesting and inspiring at the same time, as it is full of challenges and involves creative thinking and promotes innovation while being keen to know new scientific and technical fields,” said Dr Al Balushi. “I am very optimistic about this project and excited to see it being used by the stakeholders.

The latest version of the application that I am working on in cooperation with a team from theNational Space Science Authority on the Arab Gulf region has exceeded 87% accuracy.” Oil spills are one of the main factors that cause pollution in the Arabian Gulf environment and negatively affect its ecosystem as well as harm marine life.

It can lead to great environmental, economic and security disasters. “There is an urgent need to identify and discover the spread of oil spills in an urgent manner that enables the competent authorities to address them and prevent their spread. Through this project, we aspire to design an application that can be used not only at the level of the Arab Gulf, but also at the global level, to include all countries bordering the bays, seas and oceans,” explained Dr Al Balushi.

She expressed sincere thanks to the NSSA and the University of Bahrain for giving her the opportunity to participate in this pioneering national project. NSSA technical team member Shaima Shawky Al Mir said: “The authority is interested in linking artificial intelligence with space applications, and it is certain that most of the sciences are moving towards making use of artificial intelligence techniques and building robots in order to raise the level of the outputs of their applications and expand the circle of benefiting from them.

“The effectiveness of the algorithms for this project has been proven using a global database for the Arab Gulf region, and the performance is examined through quantitative measures and analysis according to best practices in such projects.” Aisha Ali Al Hajri, another member of the technical team, also indicated that the production, transportation and refining of heavy oil face many environmental challenges.

Early detection of any potential leakage sites in the bodies of tankers, transport pipelines is crucial to avoid any disasters that may be caused by large-scale oil spills, and the heavy losses that this may cause. The members of the commission’s team, Eng. Ibrahim Ali Al Burshid and Eng. Munira Jassim Al Malki, explained that this application has been prepared to identify the oil spill, its expansion limits, and the changes that it may go under different environmental conditions, including temperature, wind direction, salinity, depth and water currents.

The idea of converting the project into an application was adopted by Dr Muhammad Ibrahim Al Asiri, CEO of the NSSA, out of his belief in its importance in contributing to preserving the environment and its dimensions in promoting the use of space applications enhanced by artificial intelligence in the service of comprehensive and sustainable development.