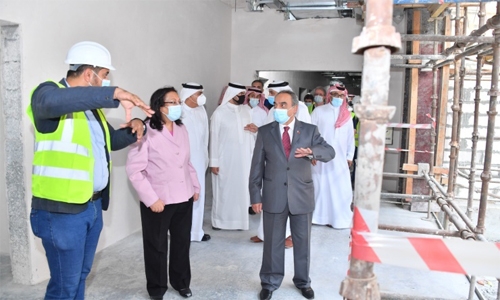 They were informed about the progress of the Muharraq Healthcare Centre and the Multiple Sclerosis Care Centre projects, both implemented by the Works Ministry for the Health Ministry, based on the directives of the late His Royal Highness Prince Khalifa bin Salman Al Khalifa to meet the needs of the citizens and upgrade the health services in the kingdom.

Minister Al-Saleh said that the kingdom’s health sector is making major strides, as reflected in the provision of comprehensive health care, raising the level of health awareness and promoting fairness in the distribution of health services, noting that the Health Ministry is determined to continue providing health care facilities and specialised health personnel to accommodate the needs in this sector.

The two ministers were informed about the progress of the Muharraq Healthcare Centre, through a detailed presentation about the project and its implementation phases.

The project includes the construction of a 100-bed long-stay healthcare unit that is fully equipped with medical services and supporting administrative services to provide healthcare for those with medical conditions that require long-term residency in hospitals, such as cerebral palsy and other disabilities

The centre will also include a reception area for emergency patients, wings and rooms for brain paralysis patients, wings and rooms for patients with other diseases, in addition to an isolation unit for patients with infectious diseases, a lab, a pharmacy, x-ray rooms, sterilization units, a physiotherapy unit, administrative support services and a central building for non-medical services serving the medical complex.

The BD12.1-million project is 53% complete, and is expected to be ready in the third quarter of 2021. It is funded by the Saudi Fund for Development (SFD).

The SFD also allocated a total of BD17.875 million as the entire cost for the construction of the project, medical equipment, consultancy fees, furniture and IT services.

The ministers were also informed about the implementation phases of the Multiple Sclerosis (MS) Care Centre in Muharraq Medical Complex, which is the first of its kind in the Arabian Gulf region. MS is a chronic immune disease that affects the central nervous system and is not infectious or hereditary.

The establishment of such a specialised centre for multiple sclerosis patients represents an advanced step in the Kingdom and the Arabian Gulf region, as it will provide diagnosis and treatment, and spare the patients the high costs of overseas treatment, and alleviate their suffering.

The facility consists of seven outpatient clinics, an MRI department, a physiotherapy department and another for manual therapy, public and private treatment rooms, a laboratory, a pharmacy, a scientific research centre, a lecture hall and medical warehouses.

The building also includes administrative offices and car parks. The National Bank of Bahrain (NBB) funds the construction, medical equipment and furniture of the BD1.7 million facility. The construction of the Multiple Sclerosis (MS) Centre is expected to be completed in the first quarter of 2022.