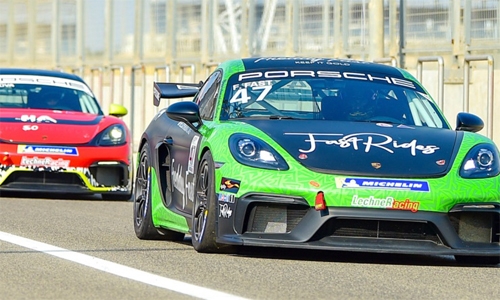 Ayhancan Guven became the first-ever driver to top the timesheet in a session held along Bahrain International Circuit's Outer Track, after setting the pace today in the first Practice of this weekend’s second round in the 2020/2021 Porsche Sprint Challenge Middle East, being held in support of the Formula 1 Rolex Sakhir Grand Prix.

Guven, who did not compete in last weekend’s events, immediately showed his quickness with a best lap of 1min 14.634secs.

Each of the top three are competing in the series’ GT3 class Pro category.

Leading the Pro-Am runners was Lucas Groeneveld, while Eddy Waldhier topped the Am participants.

Bahrainis Shaikh Ali bin Mohammed Al Khalifa (PA) and Shaikh Jaber bin Ali Al Khalifa (A) were classified ninth and 10th, respectively. The Porsche runners return to the track later tonight for a second Practice, starting at 10.25 pm and also to be held over 45 minutes.