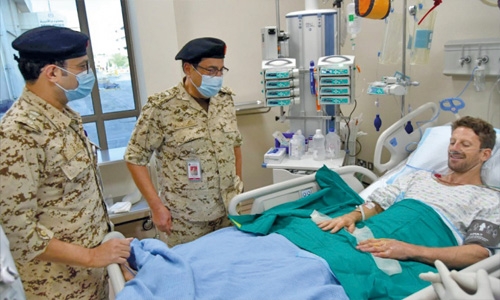 Formula 1 driver Romain Grosjean feels like he has had “a second birth” following his life-changing ordeal at last Sunday’s Gulf Air Bahrain Grand Prix, when he had a horrifying crash that resulted in a huge explosion and his car getting engulfed in flames.

Grosjean says his thoughts were with his family, especially his children, during his incredible escape, and he now looks forward to a full recovery as he continues to receive treatment at Bahrain Defence Force Hospital.

The Frenchman will miss this weekend’s F1 Rolex Sakhir Grand Prix, but is hopeful to be able to return for the season-ending round in Abu Dhabi a few days later, which may be his last chance to compete in F1 as he has yet to secure a seat in the top flight for 2021 onwards.

Speaking for the first time about the incident to French broadcaster TF1, as shared by F1 on social media, Grosjean was quoted, “I thought about a lot of things, including Niki Lauda, and I thought it wasn’t possible to end up like that, not now. I couldn’t finish my story in F1 like that. For my children, I told myself that I had to get out. “I see my visor turning all orange, I see the flames on the left side of the car. I put my hands in the fire, so clearly I felt it burning on the chassis.

“I was more afraid for my family and friends, obviously my children who are my greatest source of pride and energy, than for myself.

“I would say that there is a feeling of being happy to be alive, of seeing things differently. But also there is the need to get back in the car, if possible in Abu Dhabi, to finish my story with F1 in a different way.

“It was almost like a second birth. To come out of the flames that day is something that will mark my life forever.”