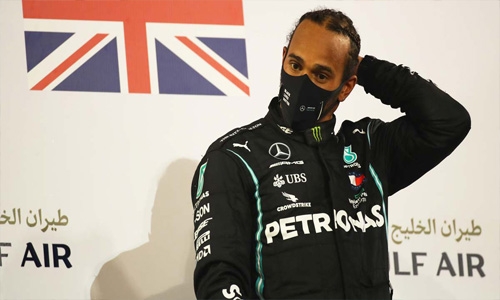 Seven-time F1 world champion Lewis Hamilton expressed his regret yesterday to be missing this weekend’s Formula 1 Rolex Sakhir Grand Prix, after it was announced that he had tested positive for COVID-19. In a post on social media, Hamilton said he is “gutted” about not being able to compete in the season’s penultimate round, and urged others to look after one another and stay positive in these “worrying times”.

His post read: “I’m devastated that I won’t be racing this weekend. Since we started the season in June, my team and I have been taking all the precautions we possibly can and following the regulations everywhere we've been in order to stay safe. Unfortunately, even though I returned three negative results this past week, I woke up yesterday morning with mild symptoms and requested another test which came back positive. I’ve immediately gone into self-isolation for 10 days.”

He added: “I’m gutted not to be able to race this weekend but my priority is to follow the protocols and advice to protect others. I’m really lucky that I feel OK with only mild symptoms and will do my best to stay fit and healthy.“Please look after yourselves out there, you can never be too careful. These are worrying times for everyone and we need to make sure we are looking after ourselves and each other. Stay positive.”

Mercedes F1 team’s announcement of Hamilton testing positive came earlier in the day yesterday. A team statement read: “Lewis was tested three times last week and returned a negative result each time, the last of which was on Sunday afternoon at the Bahrain International Circuit as part of the standard race weekend testing programme.“However, he woke up on Monday morning with mild symptoms and was informed at the same time that a contact prior to arrival in Bahrain had subsequently tested positive. Lewis therefore took a further test and returned a positive result. This has since been confirmed by a retest.”

Mercedes said that they will announce Hamilton’s replacement for the Sakhir Grand Prix in due course.