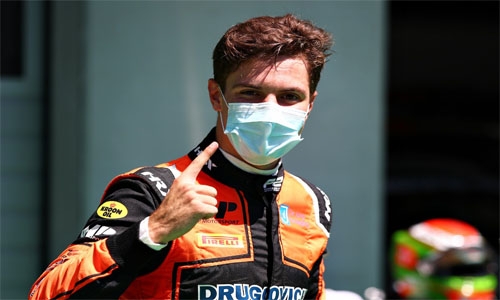 Felipe Drugovich of MP Motorsport raced to an impressive victory today in the Feature Race of the FIA Formula 2 Championship, being held in support of this weekend’s Formula 1 Gulf Air Bahrain Grand Prix.

Drugovich had a strong start from second on the grid and gained the lead early in the first lap. He did well to extend his advantage towards the end and took the cheqerued flag after 32 laps with a total winning time of 58 minutes 24.004 seconds.

Drugovich finished comfortably in front of runner-up and pole-sitter Callum Ilott of Uni-Virtuosi, who was 14.833 seconds behind.

Jehan Daruvala of Carlin claimed the final podium step. He was engaged in a tight battle with F2 championship leader Mick Schumacher of Prema Racing over the last three laps, but did brilliantly to defend his position. Daruvala crossed the finish line 19.376s behind Drugovich, while Schumacher followed in fourth with just a 0.894s gap.

Nikita Mazepin of Hitech Grand Prix was fifth and Yuki Tsunoda in the other Carlin car came sixth with an impressive drive, after he started from the very end of the 22-car grid having not been classified in yesterday’s qualifying.

Completing the race’s points scorers in the top 10 were Marcus Armstrong of ART Grand Prix, Robert Shwartzman of Prema, Dan Ticktum of Dams and Jack Aitken of Campos Racing.

The F2 Sprint Race, which will have today’s top eight start in reverse order, is tomorrow at 1pm. It will be held over 23 laps.