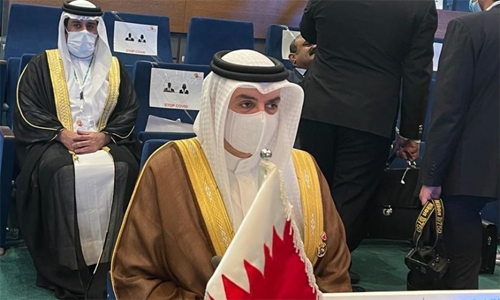 The Ambassador of the Kingdom of Bahrain to the Arab Republic of Egypt and the Kingdom's Permanent Representative to the League of Arab States, Hisham bin Muhammad Al-Jowder, affirmed the Kingdom of Bahrain's full support for the objectives and principles of the Organisation of Islamic Cooperation (OIC) aimed at preserving international peace and security, as well as its efforts to support development in the member states.

He noted that these objectives and principles are consistent with the approach of the Kingdom of Bahrain in strengthening the pillars of security and stability in the world, and maintaining friendly relations and peaceful coexistence between nations and peoples.

This came during the participation of the Ambassador, on behalf of the Minister of Foreign Affairs, Dr. Abdullatif bin Rashid Al-Zayani, in the 47th session of the OIC Council of Foreign Ministers, which was entitled "United Against Terrorism for Peace and Development", in Niamey, Republic of Niger.

The ambassador indicated that the Kingdom of Bahrain had taken part in the regional and international efforts to combat terrorism in all its forms and eradicate its sources of financing, in cooperation with brotherly and friendly countries, in light of the unstable security conditions in many countries in the region, stressing the Kingdom of Bahrain's firm position in rejecting all forms of violence, extremism and terrorism, which also calls for concerted international efforts to eradicate terrorism and dry up the sources of its support and financing.

Ambassador Al-Jowder also emphasised the Kingdom of Bahrain's firm position towards supporting all efforts aimed at establishing a just and comprehensive peace in a way that guarantees the establishment of an independent Palestinian state, in accordance with the principle of the two-state solution and based on the Arab Peace Initiative and the relevant resolutions of international legitimacy.

The ambassador also discussed the Kingdom’s efforts and positions regarding a number of Arab states, including Yemen, Syria, and Libya, hailing the efforts of OIC in establishing peace and security as well as defending and protecting human rights on the regional and international arenas.