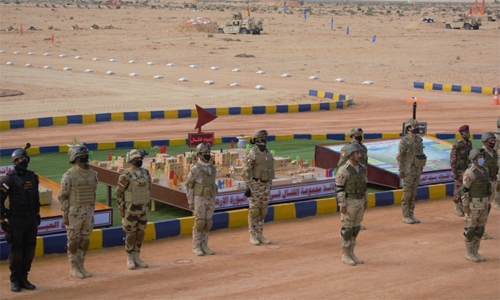 A Bahrain Defence Force (BDF) unit participated in the final stage of the joint military exercise, “Saif Al-Arab” (The Sword of Arabs), and showcased its accuracy and high competence in carrying out the tasks assigned to it through the drill’s various phases.

The parachute personnel conducted the joint jump while flying the flags of the participating countries, which showcased the extent of harmony among the Special Forces’ servicemen in carrying out their tasks with accuracy and high competence.

During the final phase of the joint drill, the Bahraini forces showcased their accuracy in hitting targets and high manoeuvrability through joint military action, alongside sisterly Arab forces participating in the exercise.

The unit’s participation added value to this exercise, and enabled our armed forces to gain military and command experience at battlefields.

The joint drill aimed primarily to increase the combat abilities and unify concepts among the participating Arab troops, as well as to verify their level and performance. It also aimed to provide an opportunity for the troops to exchange expertise, raise the level of their combat preparedness and enhance their administrative and logistical coordination.

Forces from Bahrain, Saudi Arabia, the United Arab Emirates, Jordan and Sudan participated in the two-week joint drill, held at the Mohamed Naguib Military Base and other parts of northern Egypt.