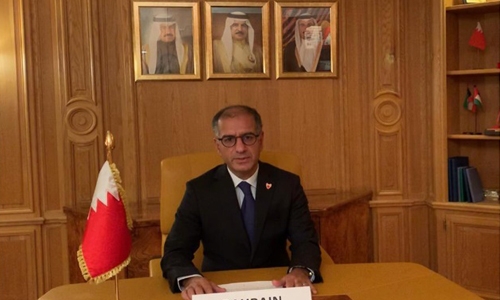 Bahrain’s delegation, headed by Permanent Representative to the UN Office and other international organizations in Geneva, Ambassador Dr. Yusuf Abdulkarim Bucheeri, participated, virtually in the 2020 Afghanistan Conference, which was held from 23-24 November 2020.

The Ambassador delivered a national statement on behalf of the Kingdom of Bahrain on developments in Afghanistan and assessed progress, challenges and the most effective means to support and promote peace, security and reconstruction.

He stressed Bahrain's continued support for these efforts and its commitment to work closely with others. He reaffirmed the Kingdom 's backing to the process that culminated in the peace agreement between the United States and the Taliban in February 2020, which helped start negotiations between the Afghans, and is a big step forward to achieve peace in Afghanistan and the region as a whole.

He pointed out that the Kingdom of Bahrain believes that strong international support is necessary to achieve a successful outcome of the intra-Afghan negotiations between the government and the Taliban and to achieve peace for the Afghan people, based on the clear progress that has already been made as a basis for further steps.

The Ambassador affirmed that Bahrain was an active and effective participant in the work of the International Security Assistance Force to provide security, while also working with the Afghan government to strengthen its institutions, and these efforts included training provided by Bahraini police personnel, and the deployment of a naval ship in the Indian Ocean.

He expressed the hope of the Kingdom of Bahrain that the international community will continue its work to ensure that contributions to security and reconstruction efforts are not only preserved and increased, but that they are effectively disseminated, calling for these efforts to cooperate with ordinary Afghans, in order to ensure real participation in their development and to enhance trust between the Afghan population and the international community.

He concluded the statement by stressing that there is tangible progress in Afghanistan, and that there is still continuous international support and momentum for these steps.

He underlined other challenges on the way, adding that Bahrain is confident that maintaining the participation and commitment demonstrated by Afghans and their partners and the international community will inevitably lead to a brighter future of peace, security and sustainable development for Afghanistan and its people.