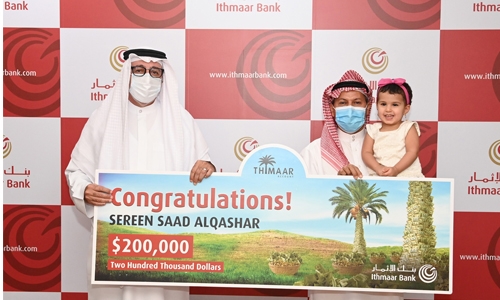 A three-year-old Bahraini child, whose father has been an Ithmaar Bank customer for over 25 years, won the bank’s third US$200,000 Thimaar Grand Quarterly Prize.

The Thimaar Grand Prize draw was earlier held at the bank’s headquarters and as part of the national efforts to help contain the Coronavirus (Covid-19) outbreak, it was remotely coordinated and supervised by the Ministry of Industry, Commerce and Tourism (MOICT) as well as external auditors BDO Bahrain and the bank’s internal auditors.

“I’ve been banking with Ithmaar Bank since 1995 when it was then called Faisal Islamic Bank of Bahrain,” said Saad Abdulla Al Qashar. “I’ve seen the Bank, which has always played a pioneering role in the establishment and subsequent growth of Islamic banking in the region, grow over the years and have been a part of its evolution and ongoing success,” he said.

“I feel privileged to be able to pass the torch on to my daughter, Sereen,” said Al Qashar. “We are truly blessed to have started the relationship with the next generation on such a positive note,” he said. “The long relationship with the bank made winning the third Thimaar grand prize of the year even more significant, and I was overwhelmed to learn that my daughter has won,” said Al Qashar. “Thankfully, our dream of winning has come true with the bank confirming that my daughter is the winner. My family and I were delighted to hear this exciting news,” he said.

“On behalf of all of us at Ithmaar Bank, I congratulate Sereen, her father and her family on winning the third Thimaar Quarterly Prize of the year, as well as all the other Thimaar winners of this month,” said Al Mutawa. “Regular savings can offer important benefits long into the future, and is a great habit to build early in life,” he said.

US appoints Tibet coordinator amid tensions with China