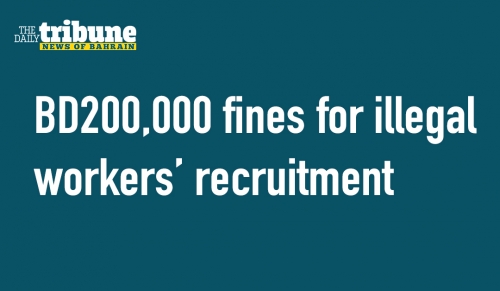 Fines of around BD200,000 were issued yesterday by the Minor Criminal Court in a number of cases involving the illegal employment and recruitment of domestic workers. According to Ministries and Public Bodies Prosecution chief prosecutor Muath Al Huqail, the court’s verdicts were issued in 35 cases that involved 38 defendants.

The chief prosecutor explained in a press statement circulated by the Public Prosecution yesterday saying: “The Public Prosecution had received several reports from the Labour Market Regulatory Authority about a number of individuals applying for Commercial Registrations (CRs) in order to obtain work permits. “After inspecting the shops, which the abovementioned CRs were issued under, it was found that these do not engage in any commercial activities.

“It was proven that the defendants were able to obtain and keep work permits without needing them.” Al Huqail added further: “Reports were also received in relation to the defendants’ illegal supply and recruitment of domestic workers, as well as the recruitment of other categories of workers without permits.” The Public Prosecution had interrogated the defendants and referred them to the concerned court for their violation of the Labour Market Regulatory Law, Al Huqail noted.