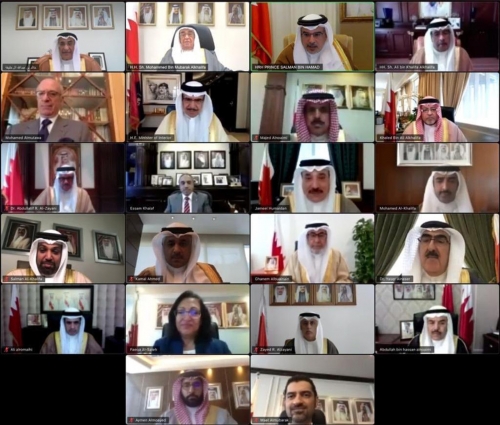 The Cabinet approved yesterday a proposal to provide an isolation ward for all incoming passengers who have visited countries with high COVID-19 infection rates, and to conduct the necessary screening alongside the efforts undertaken by the government in this regard. The Cabinet also approved the imposition of final anti-dumping duties on Bahrain’s cardboard imports of origin from Spain and Poland.

This is in accordance with the decision of the GCC’s Industrial Cooperation Council regarding imposing final anti-dumping duties against the imports of GCC countries from the above-mentioned product for a period of five years.

The Cabinet agreed to take final preventive measures in the form of a quantitative restriction for a period of three years on GCC countries’ imports of chemical plasticisers, in compliance with a decision to combat dumping against the imports of GCC countries of this product.

The Cabinet reviewed a draft law pertaining to external audit services, particularly in keeping abreast with regulatory changes, increasing the number of qualified Bahrainis, and increasing the supply of such services to reduce prices and avoid violation delays.

The Cabinet reviewed a report on legislative oversight achievements and praised the ongoing constructive cooperation between the government and the legislative authority. The Cabinet approved a memorandum submitted by the Minister of Electricity and Water Affairs on the issuance of a business license to EHYAA Renewable Company to produce and sell electricity for the 100megawatt solar power plant project.

The Cabinet referred to the Representatives Council a draft law with a memorandum on the government’s opinion on a proposal to amend some provisions of the Reorganisation and Bankruptcy Law. The Cabinet recognised an old house in Isa Town as a national historical landmark and noted that Isa Town has one of the oldest housing stocks in the Gulf, and was the first housing project in the Kingdom. The Cabinet approved a proposal regarding the transition of notary offices to e-notary