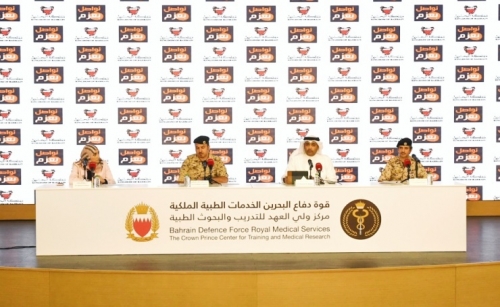 The National Taskforce for Combatting the Coronavirus (COVID-19) called for continued determination yesterday as the Kingdom steps up its fight against the deadly respiratory disease. The message was delivered during a press conference held at the Crown Prince Centre for Training and Medical Research at the Bahrain Defence Force (BDF) Hospital, to highlight measures taken to mitigate the spread of COVID-19.

Dr Al Manea said that with the support of the Kingdom’s citizens and residents, Bahrain’s comprehensive approach towards battling the spread of COVID-19 has gained wide international recognition, most recently from World Health Organisation director-general Dr Tedros Adhanom Ghebreyesus.

He explained that the current recovery rate in the Kingdom is at 83.85 per cent, with a 0.32 per cent death rate. He noted that isolation centre capacity was at 34 per cent, with 2,839 out of 8,357 beds occupied at the time of the conference; and 1,814 asymptotic cases were under optional home self-isolation having met the set criteria.

Meanwhile, Dr Al Qahtani recognised the importance of adhering to all COVID-19 safety measures and highlighted the latest action Bahrain has taken against the spread of the virus. Among them is the visit of an Italian medical delegation to strengthen the bridge of cooperation and exchange knowledge on COVID-19 treatment protocols.

Another is that the BDF Hospital has installed portable chambers to isolate suspected COVID-19 cases, with 3mx3m chambers equipped with all the technology available at standard isolation rooms while undergoing 48 air changes per hour, allowing for the safe transfer of suspected cases. For his part, Dr Al Ansari reviewed COVID-19 indicators.

The doubling time between expatriate workers stood at 21 days on June 4, with no doubling occurring during the past 33 days. Dr Al Ansari explained that the percentage of new active cases compared to recovered cases ranged between 0.6 per cent and 1.4 per cen new cases for every new recovery, an average of 1.2 per cent, compared to 0.7 per cent to 1.9 per cent during the first two weeks of June.

Dr Al Ansari then further noted that the average percentage of positive tests in the past two weeks ranged between 4.3 per cent to 10 per cent, with an average of 6.5 per cent, compared to 4.7 per cent to 9 per cent for the period of June 1 to 14.

In terms of the basic reproductive ratio for the past two weeks, Dr Al Ansari added that it ranged between 1.1 and 1.4, a significant decrease compared to the period between June 1 to 14. A ratio of 1 is necessary in order for Bahrain to successful overcome all COVID-19 challenges, he highlighted.