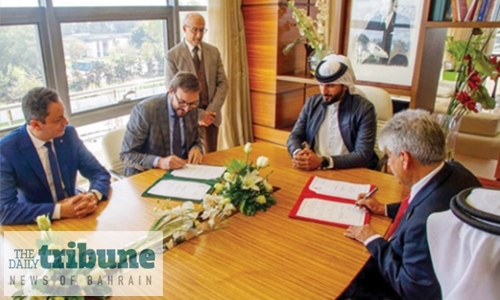 Royal Charity Organisation and Mohammed VI Foundation for the Promotion of Social Works in Education and Training have signed a Memorandum of Understanding.

The signing ceremony was attended by His Highness Shaikh Nasser bin Hamad Al Khalifa, the Representative of HM the King for Charity Works and Youth Affairs, the Chairman of the Board of Trustees of the Royal Charity Organisation.

The memorandum seeks to fulfil the wish of the two institutions to collaborate and communicate in order to consolidate cooperation and exchange experiences in the fields of social, humanitarian and solidarity work.

This positive step also falls within the framework of strengthening fraternal relations, and embodies in its essence a consensus of visions between the two institutions in the fields of social and humanitarian work.

The MoU was signed by Mustafa Al Sayyed, the Secretary General of the Royal Charity Organisation and Youssed Al Baqali, the president of Mohammed VI Foundation for the Promotion of Social Works in Education and Training