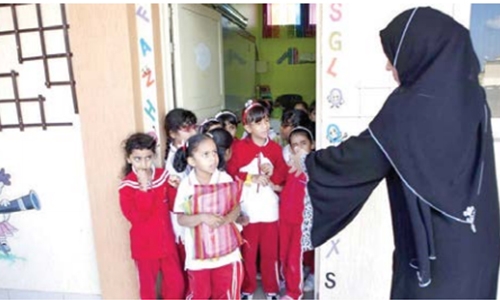 Security guard not hired ‘to teach at govt school’

Rumours that a security guard was hired to teach some subjects at a government school was refuted by the Ministry of Education officials. Many expressed outrage over the claims after rumours started circulating on all social media networks. However, Dr Mohammed Mubarak, Undersecretary at the Ministry of Education, Resources and Services, dismissed the rumours as baseless. The rumour made its way to the parliament and MPs officially questioned Education Ministry officials regarding the same. However, the rumour was regarded as unfounded.

Parliamentarians also questioned the ministry over lack of teaching staff in government schools and using teachers to teach subjects unrelated to their specialisation. The officials denied the allegations stating that there are enough staff and that teachers are only asked to teach what they are specialised in. The Ministry of Education was previously victim to another unfounded rumour when a social media user circulated a document showing that Bahrain is recruiting 40 teachers from Egypt for the next academic year.

A document that was circulated online, showed that Bahrain is recruiting around 40 teachers from Egypt for the next school year, raised concerns over Education Ministry’s (MoE) alleged reluctance to recruit unemployed Bahraini teachers. The document showed the names of 91 Egyptian teachers who had their applications to work in Sudan, Oman and Bahrain in the next school year (2018/2019) approved.

This included 38 teachers recruited to work in the Kingdom to teach Arabic language, mathematics and English language. The Education Ministry denied that the published reports were authentic and affirmed that hiring Bahrainis is a top priority. The Education Ministry is finalising the recruitment procedures of a total of 797 Bahraini teachers, who had graduated from the Bahrain Teachers’ College, as well as from universities in Bahrain and abroad, and meet the requirements, Dr Mubarak had earlier said.

The Undersecretary had extended sincere thanks and appreciation to His Majesty King Hamad bin Isa Al Khalifa for the constant support enjoyed by the Ministry of Education under his leadership through providing the necessary human resources, which, he said, would enable the ministry to implement its development projects. He also paid tribute to the Civil Service Bureau (CSB) for its cooperation in this regard.