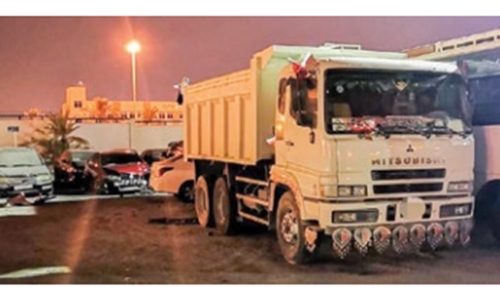 A truck driver, who was seen in a viral video online while speeding and driving on the hard shoulder of one of the Kingdom’s highways, will remain behind bars for one week as per a decision taken by the Public Prosecution yesterday. In the footage, the man was seen over-speeding and overtaking other vehicles using the emergency lane on one of the roads in Bahrain.

He was filmed by a concerned driver who shared the video on local social media networks, calling the authorities to take action against such violators. The Interior Ministry yesterday announced through a tweet that the driver has been apprehended. “Concerning the circulated video on social media about reckless driving by a truck driver on the road in a way that risk the safety of road users, the General Directorate of Traffic seized the vehicle and arrested the driver,” the ministry tweeted.

Traffic Prosecution Chief Prosecutor Hussain Al Sairafi confirmed in a statement issued yesterday that the “Public Prosecution has launched an investigation into a video on social media showing a truck being driven at a speed exceeding the speed of the street and wrong crossing using the emergency lane and driving in a way that risks lives”. Mr Al Sairafi said: “The Public Prosecution has interrogated the suspect and he confessed to the charges against him.

“The Prosecution ordered to detain him for seven days pending investigation and to refer him to the concerned court.” This is the third trucker to be arrested within three weeks because of reckless driving. It followed a nationwide petition calling to curb the “deadly” behaviours of truckers on the Kingdom’s roads, especially after it claimed the lives of two Bahraini drivers in the same period. No further information was revealed on the driver’s nationality or age.