Spotlight on rights strides | THE DAILY TRIBUNE | KINGDOM OF BAHRAIN 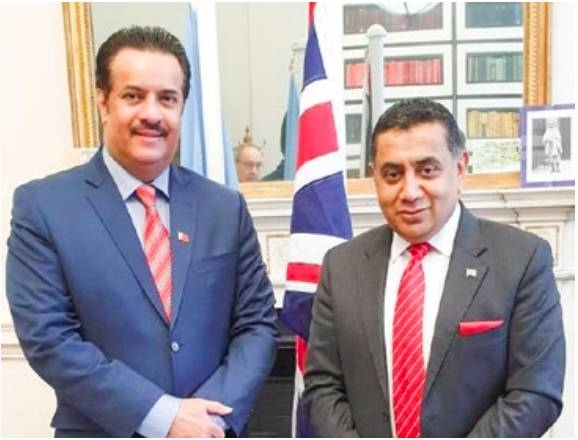 This came during a meeting with the Minister of State for the Commonwealth and the UN at the Foreign and Commonwealth Office, the Prime Minister’s Special Envoy on Freedom of Religion or Belief, Lord Ahmad of Wimbledon at his office in London, in the presence of the Ambassador of the Kingdom of Bahrain to the United Kingdom, Shaikh Fawaz Bin Mohammed Al Khalifa and the Ambassador of the United Kingdom to the Kingdom of Bahrain, Simon Martin.

The Assistant Foreign Minister highlighted the most significant initiatives launched by the Kingdom in the field of the promotion of human rights, including the “Declaration of the Kingdom of Bahrain” as a document emphasizing the importance of peaceful coexistence and religious tolerance. He noted that His Majesty King Hamad bin Isa Al Khalifa, has cited on several times that the Bahraini society “is based on a longstanding tradition of values of coexistence and spiritual and cultural tolerance, and the Bahraini society is a model to be followed when it comes to coexisting with various types of people”.

He also mentioned the Royal Decree No. 51 of 2018 that establishes the King Hamad Global Centre for Peaceful Coexistence, which aims to promote universal peace and coexistence among human beings through the embodiment of inter-cultural partnerships, and the launch of Her Royal Highness Princess Sabeeka bint Ibrahim Al Khalifa Award for Women’s Empowerment, in addition to the promulgation of many laws and legislation protecting the rights of the family and protection from domestic violence and the alternative penal law

A world cup of tragedy