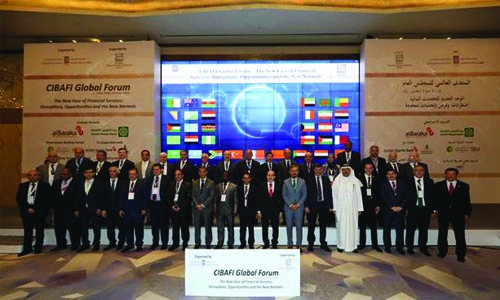 Manama : The General Council for Islamic Banks and Financial Institutions (CIBAFI), the global umbrella of Islamic financial institutions organised its third Global Forum, on the theme of “The New Face of Financial Services: Disruptions, Opportunities and the New Normals”.

The Forum is organised in partnership with the Banking Regulation and Supervision Agency of Turkey (BRSA) at Raffles Istanbul Hotel in Istanbul, Turkey.

The two-day Forum, gathered stakeholders from the Islamic finance industry, multilateral development institutions, international and national regulatory bodies, policy-makers, and academia to discuss the key emerging issues within the industry. The Forum was attended by more than 350 delegates from over 37 countries.

The Forum witnessed the launch of two groundbreaking reports, namely CIBAFI Global Islamic Bankers’ Survey 2018 and Global Takaful Survey 2018, where CIBAFI Seceratry General Abdelilah Belatik during the launch reported that having actual perception of Islamic Banks CEOs from 103 Islamic Banks from 31 countries measured on year by year basis is by itself an achievement. This year CIBAFI also stepped into the Takaful sector by starting to measure the industry growth drivers and future outlook.

The first day of the Forum concluded with a Session themed “Future of Employment: Are We Ready for the Change?”. It was chaired by Dr. Mahmoud Al Homsi, Research Economist, CIBAFI.

The second day of the Forum will continue with an exclusive CIBAFI Breakfast Session themed “Leadership and Strategy in the Era of the Fourth Industrial  Revolution”, where Rajeev Peshawaria, Chief Executive Officer & Executive Director of the ICLIF Leadership and Governance Centre, from Malaysia will talk about effective leadership style in a world of 24/7 connectivity, and how it has been changed in the open source era. Signature session will be moderated by Prof. Ahmet Faruk Aysan, Dean, İstanbul Şehir University.