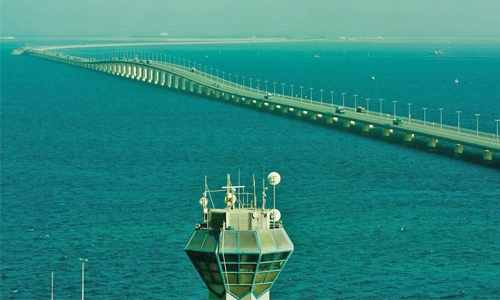 Manama : Bahrain and Saudi Arabia have completed the feasibility study of the $10-billion King Hamad Causeway, the second bridge linking both the kingdoms together.
Both the countries have recently decided to swiftly prepare the engineering plans to commence work on the project.
Stating on its official website, the Saudi Embassy in Manama confirmed that it is currently studying the methods of the construction of King Hamad Causeway.
Saudi Ambassador in the Kingdom Abdulla Al Alshaikh said that the causeway would increase bilateral trades between both kingdoms and revitalisation of their economies through facilitating the mobility procedures between them.
The new 25-km long bridge will connect the northern coasts of the island with the eastern Saudi coastline. It will be used by vehicles as well as freight and passenger trains.
It was also announced that the Causeway will strengthen commercial, economic and social relations between both kingdoms, and it will be part of the joint GCC railway project which will connect the six-member countries of the council from Kuwait to Oman.
As reported earlier, the King Hamad Causeway will be the second bridge connecting both kingdoms.