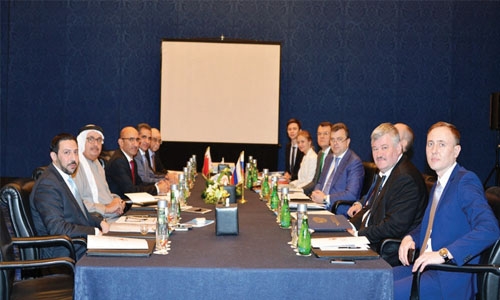 Manama : The Ministry of Industry, Commerce and Tourism held a preparatory meeting with members of the Russian economic delegation yesterday, in preparation for the first session of the Russian-Bahrain intergovernmental commission in trade, economic, scientific and technological cooperation, which will be held today at Ritz-Carlton.  The meeting was attended by officials of both the countries. Officials reviewed the deliberations on the first session of the commission and cooperation in trade, investment, banking, energy, agriculture and animal stock-raising, space and transportation.

The Russia-Bahrain Working Group on cooperation in the field of aluminum industry also held its third meeting yesterday. The Bahraini delegation was headed by Osama Alarrayedh, Undersecretary, Industrial Affairs while the Russian delegation was headed by Deputy Minister of the Ministry of Industry and Trade of the Russian Federation Sergey Tsyb. The meeting was formed by the Minister of Industry, Commerce and Tourism Zayed R. Al Zayani and Russian Minister of Industry and Trade Denis Manturov. During the meeting officials explored cooperation in the field of marketing and prospects of setting up joint ventures in bauxite and alumina and investment opportunities in private sector.