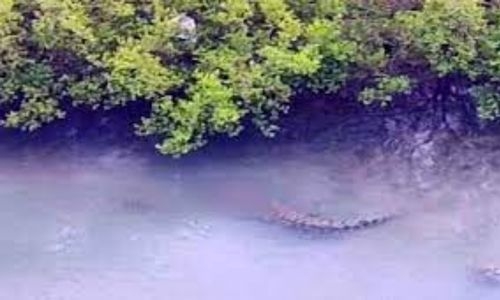 A 1-year-old boy was snatched and eaten alive by a crocodile while fishing with his father in Malaysia.

On Thursday morning, the boy was on a canoe with his 45-year-old father, identified as Moherat, off the coast of Lahad Datu in Sabah when the 11-foot crocodile grabbed him.

The father immediately tried to fight off the reptile but was not able to rescue his son.

“Despite the man’s best efforts, he ended up with numerous bite wounds and could not stop his son being dragged underwater,” said Sumsoa Rashid, head of the Lahad Datu Fire and Rescue Agency.

“There are several viral videos showing how the victim was attacked by the crocodile and then grabbed before being dragged to a nearby river.”

Moherat returned to the banks with a large gash on his head. According to Rashid, he was taken to Lahad Datu Hospital for medical treatment.

In a video circulating online, the crocodile is seen emerging to the surface with the body of the boy in its jaws.

The local fire department has joined forces with the Royal Malaysian Police and marine police to search for the boy's remains.

Due to the threat, officials have warned villagers who live by the river to stay out of the water.

“Many residents there rely on the river for their food and livelihood so they need to go into the water,” Rashid said.

“We have warned them of the extra dangers at the moment and to be especially careful because the crocodile is likely to be still in the area.”