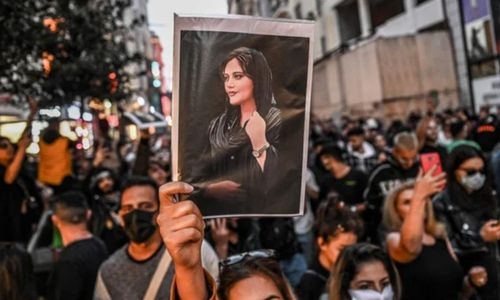 Online videos showed dozens of women on the streets of the provincial capital Zahedan holding banners that declared “Woman, life, freedom” — one of the main slogans of the protest movement that erupted in mid-September.

“Whether with hijab, whether without it, onwards to revolution,” women dressed in body-covering chador garments chanted in videos posted on Twitter.

Women-led protests have swept Iran since Amini, a 22-year-old Iranian of Kurdish origin, died following her arrest in Tehran for an alleged breach of the country’s dress code.

Security forces have killed at least 448 protesters, with the largest toll in Sistan-Baluchistan on Iran’s southeastern border with Afghanistan and Pakistan, according to Iran Human Rights, an Oslo-based non-governmental organization.

“It is indeed rare,” IHR director Mahmood Amiry-Moghaddam said of the protests by women in Zahedan, which has seen men take to the streets after Friday prayers for more than two months.

“The ongoing protests in Iran are the beginning of a revolution of dignity,” he said.

“Women and minorities, who have for more than four decades been treated as second-class citizens, are empowered through these protests to come out to the streets and demand their fundamental human rights.”

Baluchi women were among the “most oppressed” in Iran and their protests were the most organized by them so far since demonstrations broke out across the country, Amiry-Moghaddam added.

Security forces were seen opening fire with bird shots and tear gas on male protesters in Taftan, a locality in Sistan-Baluchistan, in a video published by IHR.

A prominent Sunni cleric said it was wrong to charge protesters with capital offenses.

Molavi Abdolhamid, a powerful dissenting Sunni voice in the Shiite-ruled country, said it was wrong for the hardline judiciary to charge protesters with “moharebeh” — a term meaning warring against God — which carries the death penalty.

Meanwhile,  Canada has issued additional sanctions against Iran over its denial of rights for women and girls and for cracking down on peaceful protests, Minister of Foreign Affairs Mélanie Joly said.

She added that Canada “will not stand idly by while the regime’s human rights violations increase in scope and intensity against the Iranian people.”