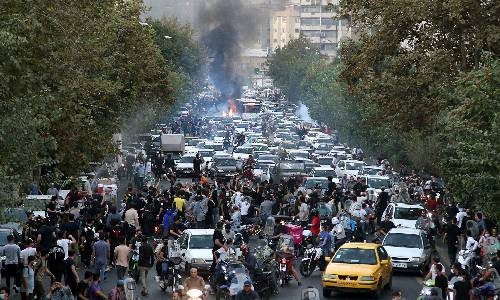 Iran’s powerful Revolutionary Guards called on the judiciary yesterday to prosecute “those who spread false news and rumours”, in an apparent bid to take the steam out of nationwide protests over the death of a young woman in police custody.

Protesters in Tehran and other Iranian cities torched police stations and vehicles earlier yesterday as public outrage over the death showed no signs of abating, with reports of security forces coming under attack. Mahsa Amini, 22, died last week after being arrested in Tehran for wearing “unsuitable attire”.

She fell into a coma while in detention. The authorities have said they would launch an investigation into the cause of her death. In a statement, the Guards expressed sympathy with the family and relatives of Amini.

“We have requested the judiciary to identify those who spread false news and rumours on social media as well as on the street and who endanger the psychological safety of society and to deal with them decisively,” the Guards, who have cracked down on protests in the past, said. Pro-government protests are planned for Friday, Iranian media said.

“The will of the Iranian people is this: do not spare the criminals,” said an editorial in the influential hardline Kayhan newspaper. The United States yesterday imposed sanctions on Iran’s morality police, accusing them of abuse and violence against Iranian women and of violating the rights of peaceful Iranian protesters, the US Treasury said.

The protests over Amini’s death are the biggest in the Islamic Republic since 2019. Most have been concentrated in Iran’s Kurdish-populated northwest but have spread to the capital and at least 50 cities and towns nationwide, with police using force to disperse protesters.

Amini was from the province of Kurdistan. A new mobile internet disruption was registered in the country, internet monitoring group Netblocks wrote on Twitter, in a possible sign that the authorities fear the protests will intensify. A group of United Nations experts, including Javaid Rehman, special rapporteur on human rights in Iran, and Mary Lawlor, special rapporteur on the situation of human rights defenders, demanded accountability for Amini’s death.

“(Amini) is another victim of Iran’s sustained repression and systematic discrimination against women and the imposition of discriminatory dress codes that deprive women of bodily autonomy and the freedoms of opinion, expression and belief,” the experts said in a statement.

A member of an Iranian pro-government paramilitary organisation, the Basij, was stabbed to death in the northeastern city of Mashhad on Wednesday, two semi-official Iranian news agencies reported yesterday. The Tasnim and Fars news agencies reports of the stabbing appeared on Telegram as both their websites were not functioning yesterday. There was no official confirmation of the death.