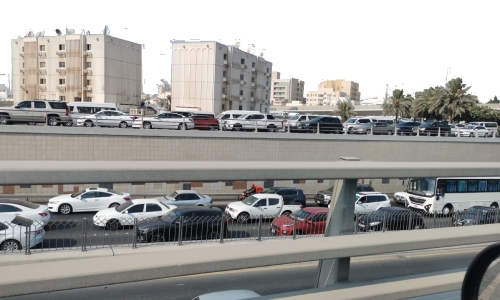 Despite best efforts to address the traffic woes that erupted following the reopening of schools in Bahrain, tailbacks are a common scene and commuters are reportedly having difficulties in moving from one point to the other across the nation.

School day timings and bus departures were rescheduled last week by the authorities as part of easing the traffic jams, which had become notorious.

The move aimed at ensuring the interests of students, parents and commuters by implementing mechanisms to facilitate an easy flow of traffic across Bahrain’s road networks.

As per the Education Ministry’s decision, the school day now begins at 7:05 am at all public educational institutions and ends at 12:35 pm at primary schools (including those of the primary level of the Religious and Jaffari institutes), 1:30 pm at intermediate schools, 1:45 and 2:15 pm at secondary schools and the Religious and Jaffari institutes (for both the intermediate and secondary levels).

Earlier, the Ministry of Interior confirmed that efforts are being intensified to ensure the smooth flow of traffic across the country.

The Community Service Police in all four governorates and the General Traffic Department has increased their presence in the vicinity of schools and kindergartens to ensure safe passage for students and teachers.

Speaking to The Daily Tribune, commuters said they continue to have difficulty across Bahrain due to heavy traffic near schools and highways.

“We acknowledge the efforts being taken by the government to ensure the smooth traffic flow. However, things don't seem to be working well. The traffic peaked during the mornings as drivers and parents rushed to drop children on the premises of schools,” a Bahrain resident said.

“Traffic jams near schools expand to highways and other road networks, leading to huge tailbacks that one can hardly imagine. Escaping traffic jams isn't an easy task,” he added.

Another Bahrain resident told The Daily Tribune that the traffic ordeal has worsened his life beyond words.

“I live in Deraz and my office is in Riffa. Every day it takes me nearly 40 minutes to cross the Janabiya circle. Earlier, it was just a ten minutes drive.  “I know many who are planning to change their residences owing to this traffic chaos. But that is not an easy task. However, despite these difficulties, I am hopeful that the authorities will be gradually able to solve the issue. We appreciate their efforts in this regard.”

Previously, the Ministry of Education hosted a workshop to prepare for the start of the new school year and to provide information on various aspects of traffic regulations near schools.

“This course is part of our careful planning to ensure the safety of kids when they return to school.

We were keen to acquaint the security guards with a variety of potential scenarios and how to handle them during the training to prepare them to act quickly when anything seemed out of the norm,” Professor Muhammad Al Abbasi, Head of the School Safety and Security Department at the Ministry of Education, had said.