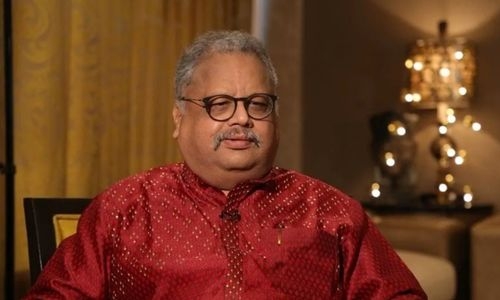 Indian investor Rakesh Jhunjhunwala died on Sunday in Mumbai after an illness. Media reports say that he had been in and out of the hospital for a few days.

Jhunjhunwala was born on July 5, 1960 in a Rajasthani family. He grew up in Mumbai, where his father worked as a commissioner of Income Tax.

Here are some facts about the billionaire investor:

1. Rakesh Jhunjhunwala was 62 when he passed away. He is survived by his wife Rekha and two children.

2. He is known as the 'King of Bulls' in stock markets.

5. The investor ran a privately-owned stock trading firm called RARE Enterprises. The enterprises derives its name from the first two letters of his name and that of his wife Rekha, who is also a stock market investor.

6. When asked why he wanted to start an airline at a time when aviation in country was not doing very well, he replied, "I'm prepared for failure".

8. Jhunjhunwala's net worth was $5.8 billion, according to Forbes. He was the 48th richest man in India.

10. His portfolio includes companies such as Star Health, Titan, Rallis India, Escorts, Canara Bank and Tata Motors among others. Overall, he had stake in 47 companies at the end of the June quarter.