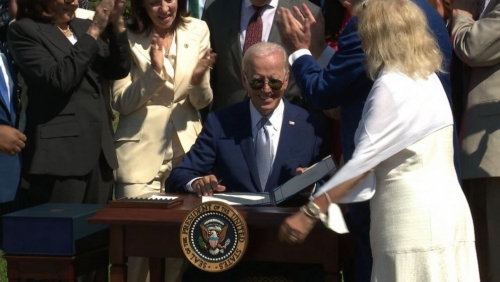 A US bill intended to promote processor chip production in the country and lessen reliance on Asian suppliers was denounced by China on Wednesday as a trade threat and an assault on Chinese companies.

President Joe Biden's law this week guarantees $52 billion in grants and other incentives to invest in American chip manufacturing. It does so in response to cautions that if China assaults Taiwan, which manufactures up to 90% of high-end semiconductors, supplies may be affected. According to the Communist Party in power, the island is considered a part of China.

According to Wang Wenbin, a spokesperson for the Foreign Ministry, the policy will "disrupt international trade and corrupt global semiconductor supply networks." China vehemently rejects that.

Without going into further detail, Wang said that certain provisions of the bill "restrict enterprises' routine investment and economic and trade activity in China."

The world's dependence on Taiwanese chips and Chinese manufacturers, which assemble the majority of electronic gadgets, was underscored by the disruption in chip supplies following the coronavirus outbreak, which hindered the production of commodities from cellphones to automobiles.

Chinese threats to attack Taiwan, which broke away from the mainland in 1949 following a civil war, have increased concerns about disruption.

Last week, in retaliation for a visit by Speaker Nancy Pelosi of the U.S. House of Representatives, Beijing began conducting military exercises all around the island. Taiwan's de facto independence might be encouraged by American officials visiting the island, according to China, which would trigger a conflict.

According to the Congressional Budget Office, the "CHIPS and Science Act" advocates for investment in research that would amount to nearly $200 billion over ten years.

The Communist Party has invested tens of billions of dollars in the growth of China's domestic chip manufacturing sector. High-end cellphones and other devices cannot be supplied by their manufacturers, which only produce low-end chips for automobiles and other things.