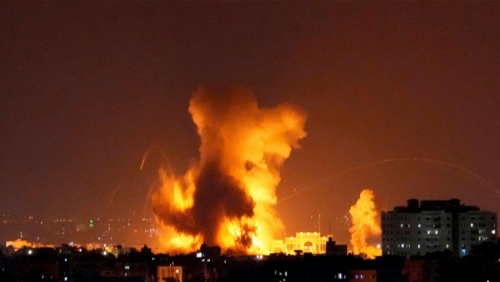 Israel pounded Gaza with airstrikes on Friday, killing at least 15 people, and triggering a barrage of retaliatory rocket fire from militants in the Palestinian enclave.

The most severe Gaza violence since a war in May of last year followed days of tensions between Israel and the Islamic Jihad group, which Israel accused of planning attacks.

A five-year-old girl in Gaza was among those killed in the Israeli strikes, according to the health ministry in the blockaded territory controlled since 2007 by Hamas.

Israeli Prime Minister Yair Lapid described the strikes as a “precise counter-terror operation against an immediate threat”, and announced the killing of Taysir Al Jabari, who he described as Islamic Jihad’s second-in-command.

Islamic Jihad said the Israeli bombardment amounted to a “declaration of war”, before it unleashed an “initial response” of more than 100 rockets towards Israel.

It later announced another flurry of rocket fire, as air raid sirens rang out across southern and central Israel and officials in the country’s commercial capital Tel Aviv opened the city’s bomb shelters.

There were no immediate reports of casualties inside Israel.

The army had initially confirmed at least 70 rocket launches from Gaza, saying 11 had fallen inside the strip, with dozens intercepted and others landing in open areas.

Hamas has fought four wars with Israel since seizing control of Gaza in 2007, including the conflict last May. Islamic Jihad is a separate group, but aligned with Hamas.

The sides exchanged fire for several days without Hamas joining the fray.

Hamas’s moves amid the current violence could prove crucial in determining its severity, with the group facing pressure from some to maintain calm in order to improve economic conditions in the territory.

Gaza City resident Abdullah Al Arayshi said the situation was “very tense”. “The country is ravaged. We’ve had enough of wars. Our generation has lost its future,” he told AFP.

Hamas said Israel has “committed a new crime for which it must pay the price”.

The Israeli strikes were ongoing late Friday, targeting what the army described as militant targets across the territory. Gaza’s health ministry has confirmed 10 dead along with at least 75 injured.

Flames poured out of a building in Gaza City following the first round of strikes, while wounded Palestinians were evacuated by medics.

Five-year-old Alaa Kaddum had a pink bow in her hair and a wound on her forehead, as her body was carried by her father at her funeral.

Hundreds of mourners gathered in Gaza City for the funerals of Jabari and others killed in the air strikes.

Israeli military spokesman Richard Hecht said “we are assuming about 15 killed in action” in Gaza, referring to Palestinian combatants.

Israeli tanks were lined up along the border and the military said Thursday it was reinforcing its troops.

US ambassador Tom Nides said Washington “firmly believes that Israel has a right to protect itself” and urged all sides to maintain calm.

The strikes come four days after Israel closed its two border crossings with Gaza and restricted the movement of Israeli civilians living near the frontier, citing security concerns.

The measures follow the arrest in the occupied West Bank of two senior members of Islamic Jihad. The militant group did not launch attacks on Israeli territory after the arrests.

The office of Palestinian president Mahmoud Abbas, which runs the occupied West Bank, said the Israeli military action amounted to a “dangerous escalation” and called on the international community to curb Israeli “aggression”.

The Israeli military banned large gatherings in communities within 80 kilometres of the Gaza frontier until Saturday evening.

The measure follows four days of road closures and other restrictions in the border area.

Palestinians including patients and those with Israeli work permits have been prevented from leaving the Gaza Strip since Tuesday, while the goods crossing has also been shut.

Gaza’s only power station is at risk of imminent outage due to a lack of fuel supplies through Israel, its manager warned on Thursday.

This week’s shutdown of the border area follows a raid by security forces in the northern West Bank district of Jenin.