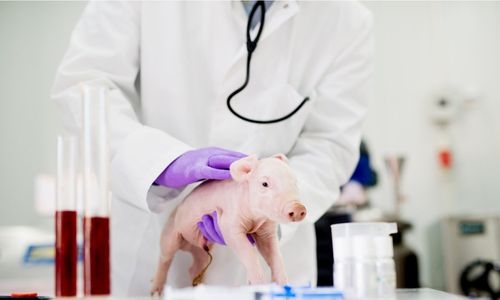 Scientists announced on Wednesday they have restored blood flow and cell function throughout the bodies of pigs that were dead for an hour, in a breakthrough experts say could mean we need to update the definition of death itself.

The discovery raised hopes for a range of future medical uses in humans, the most immediate being that it could help organs last longer, potentially saving the lives of thousands of people worldwide in need of transplants.

The US-based team stunned the scientific community in 2019 by managing to restore cell function in the brains of pigs hours after they had been decapitated. For the latest research, published in the journal Nature, the team sought to expand this technique to the entire body. They induced a heart attack in the anaesthetised pigs, which stopped blood flowing through the bodies.

This deprives the body's cells of oxygen -- and without oxygen, cells in mammals die. The pigs then sat dead for an hour. The scientists then pumped the bodies with a liquid containing the pigs' own blood, as well as a synthetic form of haemoglobin -- the protein that carries oxygen in red blood cells -- and drugs that protect cells and prevent blood clots.

Blood started circulating again and many cells began functioning including in vital organs such as the heart, liver and kidney, for the next six hours of the experiment.

"These cells were functioning hours after they should not have been -- what this tells us is that the demise of cells can be halted," Nenad Sestan, the study's senior author and a researcher at Yale University, told journalists. Co-lead author David Andrijevic, also from Yale, told AFP the team hopes the technique, called OrganEx, "can be used to salvage organs".

The technique could potentially also be used to resuscitate people. However this could increase the risk of bringing back patients to a point where they are unable to live without life support -- trapped on what is called the "bridge to nowhere," Brendan Parent, a bioethicist at the NYU Grossman School of Medicine, said in a linked comment in Nature.

Sam Parnia of the NYU Grossman School of Medicine said it was "a truly remarkable and incredibly significant study". It showed that death was not black and white but rather a "biological process that remains treatable and reversible for hours after it has occurred", he said.

Benjamin Curtis, a philosopher focused on ethics at the UK's Nottingham Trent University, said the definition of death may need updating because it hinges on the concept of irreversibility."This research shows that many processes that we thought were irreversible are not in fact irreversible, and so on the current medical definition of death a person may not be truly dead until hours after their bodily functions have stopped," he told AFP. "Indeed, there may be bodies lying in morgues right now that haven't yet 'died', if we take the current definition as valid."

During the experiment, pretty much all of the OrganEx pigs made powerful movements with their head and neck, said Stephen Latham, a Yale ethicist and study co-author.  "It was quite startling for the people in the room," he told journalists. He emphasised that while it was not known what caused the movement, at no point was any electrical activity recorded in the pigs' brains, showing that they never regained consciousness after death.

While there was a "little burst" on the EEG machine measuring brain activity at the time of the movement, Latham said that was probably caused by the shifting of the head affecting the recording.

However Curtis said the movement was a "major concern" because recent neuroscience research has suggested that "conscious experience can continue even when electrical activity in the brain cannot be measured". "So it is possible that this technique did in fact cause the subject pigs to suffer, and would cause human beings to suffer were it to be used on them," he added, calling for more research.