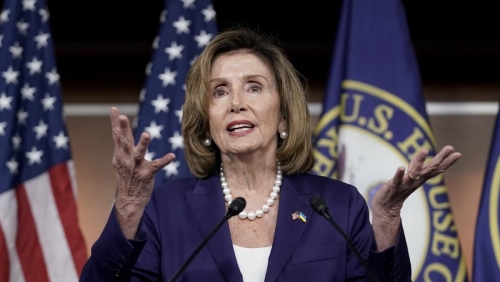 After her high-profile trip to Taiwan, US House Speaker Nancy Pelosi was in South Korea on Thursday, where her agenda included a visit to the border with the nuclear-armed North, an official told AFP.

Pelosi, who arrived in Seoul late on Wednesday, will visit the heavily-fortified Demilitarized Zone (DMZ), where the two neighbours' forces stand face to face, the South Korean official said.

She would be the highest-ranking US official to visit the inter-Korean truce village of Panmunjom since the then-president Donald Trump met North Korean leader Kim Jong Un there in 2019.

The pair "expressed concern over the grave situation in which North Korea's level of threat is heightening", Kim Jin Pyo said, reading a joint statement after their meeting.

North Korea has conducted a record-breaking blitz of weapons tests so far this year, including firing an intercontinental ballistic missile at full range for the first time since 2017.

The two parliamentarians called for "strong and extended deterrence against North Korea", and said that they would support efforts by the two countries' leaders to get Pyongyang to denuclearise.

Pelosi is scheduled to speak on the phone with President Yoon Suk Yeol, who is on holiday this week, officials said.

Local media have criticised Yoon's purported snub of Pelosi, pointing to his failure to meet her in person, and his administration's decision not to send a delegation to greet her at the airport.

Some published photos show the President attending a play in central Seoul the night Pelosi landed.

Yoon took office in May, vowing to boost ties with the United States, including ramping up the joint military drills that always infuriate North Korea.

Joint drills had been suspended due to Covid-19, and during a period of ill-fated diplomatic engagement with Pyongyang under Yoon's predecessor, Moon Jae In.

The first such joint drills— now known as Ulchi Freedom Shield— will begin later this month.

At a brief press conference in Seoul, during which she did not take any questions, Pelosi hailed the "special" relationship between South Korea and the United States— but made no mention of her visit to Taipei.

She had defied repeated Chinese warnings to visit Taiwan, which China considers its territory. Beijing had said that any such trip would be viewed as a major provocation. It has since launched massive military drills around the island.

She is scheduled to fly to Japan later on Thursday for the final leg of her Asia trip.