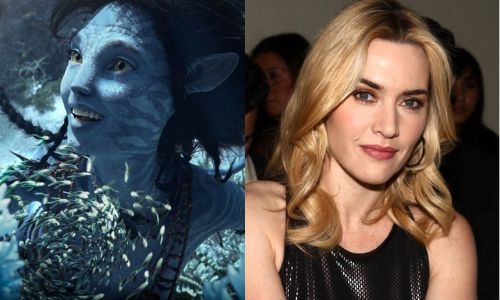 The details around Kate Winslet’s character in the upcoming Avatar 2, directed by James Cameron have been kept tightly under wraps for the longest time. The audience did learn that the Titanic actor was performing some underwater stunts but not much was known about the details of her character. The first look of her character named Ronal is finally out now.

Speaking to Empire, the Oscar winning actor revealed that Ronal leads the Metkayina tribe, who live in the vast oceans of Pandora, and will play a significant role in the upcoming film. Kate shared with the publication, “She is deeply loyal and a fearless leader.” She added, “She is strong. A warrior. Even in the face of grave danger, and with an unborn baby on board, she still joins her people and fights for what she holds most dear. Her family and their home.”

Kate has performed some superhuman stunts in the film and by her own admission she held her breath underwater for “seven minutes and 14 seconds.” “The most amazing thing for me as a middle-aged woman was to learn something not just new, but superhuman,” she said. Cameron had spoken about the same in 2019 when he shot with Winslet for her part.

Kate and James Cameron earlier collaborated on the all-time hit Titanic. Talking about their collaboration decades later, Kate said that they “are both totally different people now to who we were 26 years ago.” “He is calmer, and I am definitely more hyperactive now,” she said.

Earlier this year, footage from Avatar 2 was screened at CinemaCon, and wowed the audience. Cameron said at the event, “With the first Avatar, we set out to push the limits of the big screen. With the new Avatar films, we’re pushing those limits even farther, with 3D, with high dynamic range, with high frame rate, higher resolution, and a much greater reality in our visual effects.”