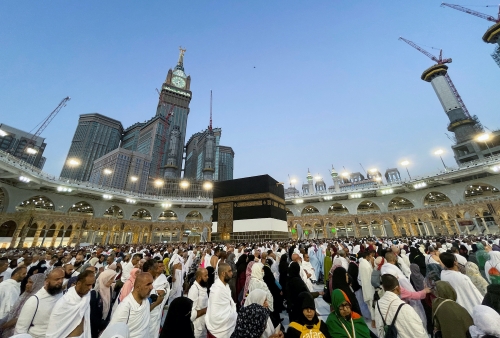 Pilgrims from across the globe started converging in thousands on Mecca in Saudi Arabia yesterday for the Hajj pilgrimage -- the world’s biggest gathering, which this year would welcome some 1 million pilgrims after two years of COVID-19 pandemic-induced disruptions.

This year, entry is only for pilgrims aged 18 to 65 who are fully vaccinated against COVID and do not have chronic diseases. Wrapped in white robes, hajjis yesterday walked under the burning desert sun, with some carrying umbrellas, to perform the first ritual of Hajj, as thousands walked around the Kaaba, the sacred building at the centre of Mecca’s grand mosque, immersing themselves in divinity.

“Praise be God... It’s impossible to describe my feelings right now,” said Ahmed Sayed Mahmoud, an Egyptian pilgrim. “Being in the Grand Mosque and in the land of the two holy mosques makes me very happy.”

The latest statistics of the Saudi Ministry of Hajj and Umrah show that 344,881 pilgrims have arrived in Madinah through the air and land ports to perform Hajj, a once-in-a-lifetime duty for every able-bodied Muslim who can afford it.

Bangladeshis top the chart of foreigners with 12,411 pilgrims, followed by Pakistan with 8,229 pilgrims, India with 6,595 pilgrims, Iran with 6433 pilgrims, and Nigeria with 6,320 pilgrims. Statistics say 265,130 pilgrims left Medina during the past days to Makkah, while 79,451 pilgrims are still there in Medina. Security was tight with officers stationed among the pilgrims as cameras repeatedly scanned the surroundings and checkpoints.