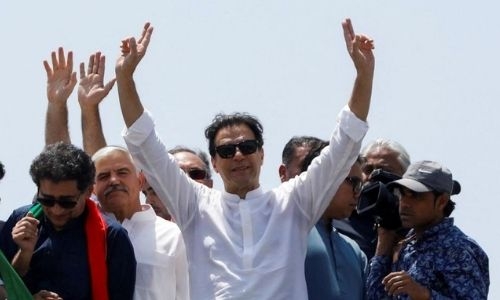 Defiant former Prime Minister Imran Khan early Thursday warned Pakistan’s government to set new elections in the next six days or he will again march on the capital along with two million people.

Khan spoke at a rally of thousands of demonstrators in Islamabad aiming to bring down the government and force early elections. The government earlier had summoned troops to guard important buildings, including the parliament and offices of the president and Prime Minister Shehbaz Sharif. The measures came following clashes between demonstrators and police.

Khan in his address claimed that five of his supporters were killed in the violence across the country. There was no immediate comment from the government about Khan’s claim, whose supporters were dispersing.

Earlier, Khan had vowed that he will stage a prolonged sit-in to get his demands accepted.

Khan, a former cricket star turned politician, was prime minister for over three and half years until being ousted last month by a no-confidence vote in Parliament. Since then, he has held rallies across the country, saying his removal from office was the result of a US-organized plot and collusion with Sharif. Both have denied the allegation.

Khan began his march toward Islamabad from the northwestern city of Peshawar. Clashes initially erupted in the eastern city of Lahore, when riot police fired tear gas and pushed back hundreds of demonstrators who hurled stones as they tried to pass a roadblocked bridge near the city to board busses bound for Islamabad.

Dozens of Khan’s followers also briefly clashed with police in Islamabad, where the demonstrators set fire to bushes lining a main boulevard, sending smoke and flames rising into the sky. Altercations were also reported elsewhere, including in Karachi, where demonstrators burned a police vehicle.

At least a dozen demonstrators and several policemen were injured. Ahead of Wednesday’s marches, authorities used dozens of shipping containers and trucks to block off major roads into Islamabad.

Khan himself travelled by helicopter to a highway some 100 kilometers northwest of Islamabad, where he condemned the police crackdown and urged supporters to join the rally.

The government on Wednesday responded by launching a crackdown and arrested more than 1,700 Khan supporters. The measures were announced after a policeman was killed Tuesday during a raid on the home of a notable Khan supporter in Lahore.

In a separate development Wednesday, days-long talks between Islamabad and the International Monetary Fund concluded in Qatar without Pakistan securing a revival of a $6 billion bailout package from the global lender.

After the talks, the IMF urged Pakistan to remove subsidies on fuel and energy. The subsidies were approved by Khan’s government in February, forcing the IMF at the time to withhold a crucial tranche of about $1 billion.