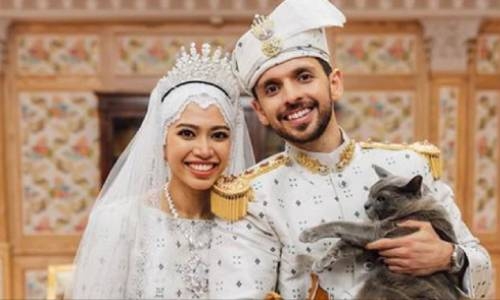 Princess Fadzillah Lubabul, the daughter of the Sultan of Brunei, got married in an elaborate week-long wedding that kicked off on January 16. As the head of oil-rich Brunei, Sultan Hassanal Bolkiah is one of the world's wealthiest royals with a net worth that is upwards of $20 billion, according to Forbes. Princess Fadzillah, the ninth of his 12 children, is popularly known as the "sporty princess". She married Abdullah Al-Hashemi in a spectacular seven-day celebration, wearing jewellery borrowed from her stepmother's royal collection, Tatler reported.

36-year-old Princess Fadzillah is the daughter of Hajah Mariam, the Sultan's second wife, whom he divorced in 2003. The couple had four children, including 30-year-old Prince Mateen, who is an Instagram star in his own right.

Prince Mateen wished his elder sister a wedding and shared a few pictures from the ceremony. "Congratulations to the newlyweds," he wrote. "I'm so happy for the both of you. Big love to my beautiful sister."

According to Hola News, the wedding took place at the Sultan's official residence, Istana Nurul Iman. It is among the world's largest palaces, with over 1,700 rooms and a banquet hall that can accommodate up to 5,000 people. One of the wedding ceremonies was also held at the country's Omar Ali Saifuddin Mosque.

Princess Fadzillah wore an exquisite diamond tiara for her wedding, according to the jewellery website Tiara Mania. The tiara's largest pear-shaped diamond is interchangeable with a heart-shaped diamond. Her wedding dress was designed by Malaysian designer Bernard Chandran.

For the reception, which was held a day after the January 23 wedding, the princess chose another show-stopping tiara featuring six emeralds.