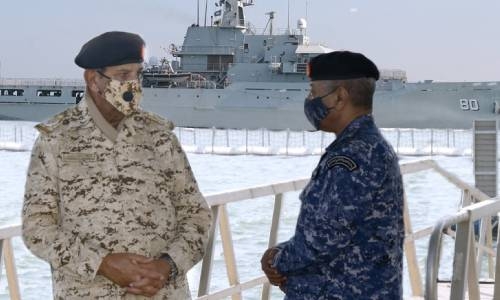 The commander-in-chief affirmed that the distinguished position reached the BDF’s various branches is the outcome of the sound directives of His Majesty King Hamad bin Isa Al Khalifa, the Supreme Commander, lauding the noble role played by the BDF brave personnel to undertake the tasks entrusted to them to serve the homeland and defend it with determination and strength.

He indicated that the Royal Bahrain Naval Force now includes advanced formations and systems, making it one of the basic pillars of the kingdom’s military power, expressing deep pride in the dedicated role played by the officers, non-commissioned officers and servicemen of the Royal Bahrain Naval Force in carrying out their duties with all sincerity and dedication, as well as in facing challenges and dangers, under all circumstances and at all locations.