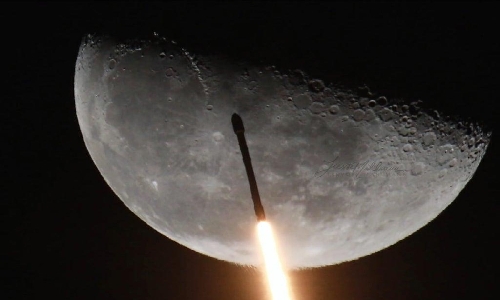 A SpaceX rocket that launched almost seven years ago is on a collision course with the moon, experts have warned.

The Falcon 9 booster, which launched in February 2015 as part of an interplanetary mission, has been following a chaotic orbit since running out of fuel following its mission.

The four-tonne rocket is expected to hit the moon at a velocity of 2.58km/s at some point in the coming weeks.

The space junk is being tracked by Bill Gray, the creator of the Guide astronomy software used to monitor near-Earth objects, asteroids, minor planets and comets.

The astronomer put out a call for other observers to help gather data and calculate when the rocket might crash into the moon, concluding that there will be a “certain impact” on 4 March.

The exact location of the impact is still not known, as several factors could affect the rocket’s trajectory.

“Space junk can be a little tricky,” Mr Gray noted in a post on his Project Pluto website.

“I have a fairly complete mathematical model of what the Earth, moon, sun and planets are doing and how their gravity is affecting the object. I have a rough idea of how much sunlight is pushing outward on the object, gently pushing it away from the sun.

“However, the actual effects of that sunlight are hard to predict perfectly. It doesn’t just push outward; some of it bounces ‘sideways’.”

The long cylindrical shape of the object, which is currently spinning slowly, means the measurements are ambiguous.

If the astronomers can determine the precise impact location, they hope the Lunar Reconnaissance Orbiter will be able to find the crater or even capture the moment of impact.

This is the first unintentional case of a piece of space junk crashing into the moon, according to Mr Gray, making it of “scientific interest” as the impact crater will offer insight into the geology of that part of the moon.