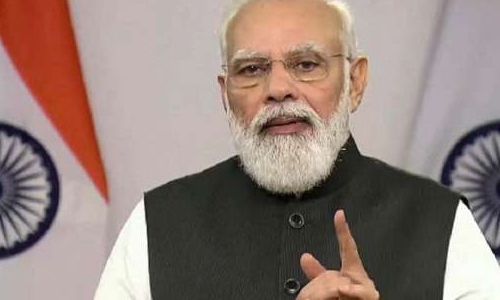 Soon after taking office in 2014, Prime Minister Narendra Modi outlined his vision for India – to transform the country into a “leading” force from a “balancing” one.

Cut to 2022, some trends are discernible – which show that the Modi government is rebalancing India’s foreign policy and also aligning its domestic policies to place India on the road to cementing its position as a regional leader.

Whether it’s holding its own in the face-off against China for almost two years along the icy Himalayan heights in Ladakh, delivering on promised development projects in partner countries within stated timelines, meeting the global demands of drugs and vaccines during the covid-19 pandemic, committing to achieve carbon neutrality by 2070, breaking away from the talks-to-no-talks-to-talks cycle with Pakistan or articulating, implementing and getting onboard partners for initiatives like the International Solar Alliance or the Coalition for Disaster Resilient Infrastructure – the outlines of the rebalance in India’s foreign policy are clear.

Analysts have noted a new purposefulness in India’s engagement with Southeast Asia with the declaration of New Delhi’s interest in preserving freedom of navigation in the South China Sea.

This has been coupled with an emphasis to become the security provider of choice to countries in the Indian Ocean region.

New Delhi’s foreign policy rebalance almost coincides with two major global trends – one being a “greater caution in US power projection and an effort to correct its over-extension” and the second being the rise of China.

These were pointed out by External Affairs Minister S Jaishankar in a speech in December 2021.

Add to this the churn caused by covid-19 and the exposure of weaknesses of the current international order brought to the fore by the pandemic.

Against this backdrop, there is a recognition of India as a country that provides solutions (Vaccine Maitri being an example), shaping global discourse on key matters (the UN Security Council resolution 2593 on Afghanistan passed during the Indian presidency of the Council in August 2021 calling on the Taliban not to use Afghan soil for terrorist activity is now accepted widely) and as a country that does not stand in the way of consensus-building (India’s commitment to carbon neutrality by 2070).

According to Harsh V Pant, head of the Strategic Studies Programme at New Delhi based Observer Research Foundation think tank, the rebalance or fine-tuning of Indian foreign policy has been across the board.

New Delhi’s “Neighbourhood First” policy – i.e. engaging all of India’s immediate neighbours in South Asia – has been adapted to factor in provocations from neighbours, Pant said. “New Delhi has understood that neighbours will provoke you so it has worked out when to react and when not to.

It has understood the need for strategic patience with neighbours. In that sense, there has been a recalibration of its approach to the neighbourhood,” he said.

Ties have been upgraded with partners like Japan while with countries like the United Arab Emirates (UAE) in the Gulf region, relations have been completely reworked in scale and scope.

If more evidence were needed of India’s foreign policy rebalance in keeping with its regional power aspirations – a key example is the Quad (the Quadrilateral dialogue among the US, India, Australia and Japan) and India’s embrace of the Indo-Pacific, say analysts.

Though first broached by others, India is today one of the foremost proponents of the Indo-Pacific concept that sees the vast swathe of the ocean and landmass extending from the west coast of the US to the eastern shores of Africa as one geostrategic entity.

With the future of the region and forthcoming contests in the Indo-Pacific expected to be shaped by technology, it was only natural that the Quad would take note and focus on coming up with alternatives. A fact sheet issued by the Quad after an in-person meeting in September 2021 “committed” the four countries to work towards fostering “an open, accessible, and secure technology ecosystem.”

A more detailed statement by the Quad leaders stated that the “ways in which technology is designed, developed, governed, and users should be shaped by our shared democratic values and respect for universal human rights.”

With technology expected to spur the global economy in the coming years, it was no surprise that India, in December 2021, announced a US $10 billion packages to incentivize companies to set up chip manufacturing and design facilities in the country. The scheme is expected to bring in investment to the tune of US $ 22 billion in the country and can be seen as an example of India aligning its domestic policy with its foreign policy objectives.

The semiconductor policy “is an example of India attracting investments and technology in a strategic domain” in preparation for the future, said Biswajit Dhar, a professor of international trade at the New Delhi based Jawaharlal Nehru University.

“The PLI initiative is an enabler that allows India to better participate in global value chains.

One of the reasons India has not been able to exploit the free trade pacts that it has signed is that it doesn’t manufacture products that are in demand with the global value chains,” Dhar said, pointing the PLI policy identifying strategic sectors like solar modules and drug intermediaries for the schemes.

India’s renewed efforts to conclude free trade pacts with key partners like the UK, European Union and the UAE also ties in with its efforts to integrate with the global economic frameworks.

“With the World Trade Organisation getting weakened and countries increasingly entering into free trade arrangements, India will be seen as being left out or losing out in the face of high tariff walls” if it does not conclude FTAs said former foreign secretary Kanwal Sibal.

“It is logical to enter into pacts with countries with which we have balanced trade or to whom we export,” he said.

Another example of India rebalancing its foreign policy as a regional power is the decision to hold 2+2 talks with Russia – i.e. dialogue between Indian and Russian foreign and defence ministers.

Russia has also started deliveries of the S-400 air defence system to India. The deal worth an estimated $5.4 billion for five systems was signed in 2018.

The deft diplomacy in evidence post the Taliban takeover of Kabul – ie India mustering support from the Central Asian Republics to delay recognition for the Taliban government till it offers more security guarantees – is also a good case in point.

Last but not least is the example of the new partnership between the UAE, Israel, the US and India.

The raison détre of the grouping is economic cooperation including connectivity.

“This is a major step that we have taken to coordinate our economic approach” in a region where India is seen as a benign power, said Sibal.