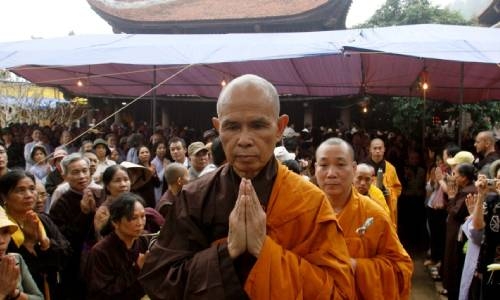 One of the world’s most influential Buddhist monks, Thich Nhat Hanh, has died in Vietnam at the age of 95, his Zen teaching organisation said in a statement.

The master of meditation “passed away peacefully” at the Tu Hieu Temple in Hue – where his spiritual journey began and Vietnam’s Buddhist heartland – the Plum Village Community of Engaged Buddhism said.

“We invite our beloved global spiritual family to take a few moments to be still, to come back to our mindful breathing, as we together hold Thay in our hearts,” the organisation said on Nhat Hanh’s Twitter account, using the Vietnamese word for teacher.

The poet and peace activist spent nearly 40 years in exile after calling for an end to the Vietnam War, but he became hugely influential within Buddhism and was seen as second only to the Dalai Lama.

In gentle and yet powerful tones he would speak of the need to “walk as if you are kissing the earth with your feet” and is credited with bringing mindfulness to Western countries, and setting up retreats around the world. He was the author of more than 100 books on mindfulness and meditation.

Thich Nhat Hanh, who spoke seven languages, lectured at Princeton and Columbia universities in the United States in the early 1960s. He returned to Vietnam in 1963 to join a growing Buddhist opposition to the US-Vietnam War, demonstrated by self-immolation protests by several monks.

“I saw communists and anti-communists killing and destroying each other because each side believed they had a monopoly on the truth,” he wrote in 1975.

“My voice was drowned out by the bombs, mortars and shouting”.

Towards the height of the Vietnam War in the 1960s, he met US civil rights leader Martin Luther King, whom he persuaded to speak out against the conflict.

While in the US to meet King, the South Vietnamese government banned Thich Nhat Hanh from returning home.

King called Thich Nhat Hanh “an apostle of peace and non-violence” and nominated him for the Nobel Peace Prize.

“I do not personally know of anyone more worthy of the Nobel Peace Prize than this gentle Buddhist monk from Vietnam,” King wrote in his nomination letter.

Fellow monk Haenim Sunim, who once acted as Thich Nhat Hanh’s translator during a trip to South Korea, said the Zen master was calm, attentive and loving.

“He was like a large pine tree, allowing many people to rest under his branches with his wonderful teaching of mindfulness and compassion,” Haemin Sunim told the Reuters news agency.

“He was one of the most amazing people I have ever met”.

Thich Nhat Hanh had a stroke in 2014 and his health began to decline.

He was allowed to return to Vietnam in 2018 and lived his final days at the Tu Hieu temple, where he was closely monitored by plainclothes police.

Hundreds flocked to the pagoda to join the monk on his outings around the temple’s lush gardens.

“He taught us to love people, to love ourselves, to love nature,” said Tran Thi My Thanh, who made the pilgrimage to Hue with friends from Ho Chi Minh City.