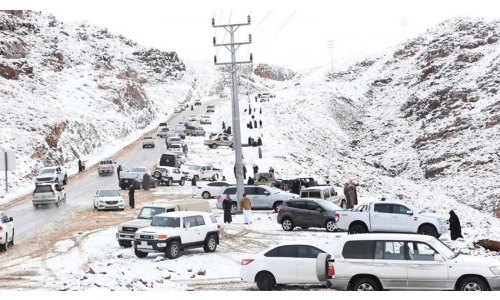 Saudi Arabia is experiencing an unprecedented sharp drop in temperatures, with rare snowfalls and hailstorms blanketing six cities on the north side of the country.

Temperatures have hit minus 3 degrees in some places.

The weather is expected to intensify further in the coming weeks, with Saudi Arabia’s National Center of Meteorology predicting the mercury to further dip in the capital Riyadh.

Weather reports say Arctic air masses from Siberia is transforming landscapes in and around Saudi Arabia.

Hussain Al-Qahtani, a spokesman for the Meteorological Center, said there will be a “sharp drop in temperatures at the end of the week in the northern and central regions.” Riyadh is expected to record between one and three degrees below zero.”

The city of Turaif at the border with Jordan recorded yesterday minus 3 degrees and Qurayyat two degrees below zero.

On Wednesday, the city of Turaif recorded six degrees below zero, which is the lowest in 30 years.