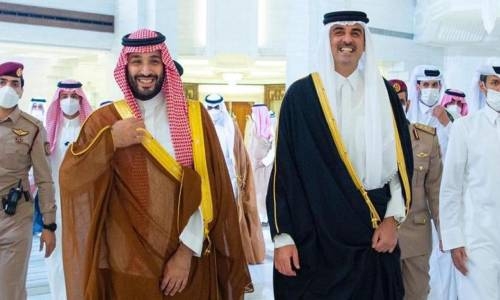 Qatar is the third stop on a tour of Gulf Arab states by Mohammed bin Salman ahead of a Gulf summit later this month.

The Crown Prince and the Emir of Qatar presided over the sixth meeting of the Saudi-Qatari Coordination Council.

The Emir of Qatar welcomed the Crown Prince on his Qatar visit, while the Crown Prince expressed his thanks and appreciation to the Emir for the warm reception and generous hospitality, SPA reported.

During the meeting, they reviewed aspects of relations between the two brotherly countries, and ways to enhance cooperation in various fields, as well as the latest developments in regional and international events and the efforts made in their regard.

Wednesday's visit was the Saudi prince's first official trip to Qatar since he was named crown prince in 2017.

The Saudi prince's tour had already stopped in Oman and the the UAE where he visited Expo 2020 in Dubai earlier on Wednesday before taking the short flight to Doha. He is still expected to travel to Bahrain and Kuwait.