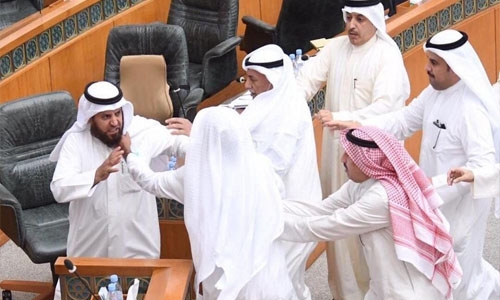 Kuwait's parliament approved the 2021-22 state budget on Tuesday but failed to quell a bad-tempered standoff between government and opposition that has blocked economic reforms and hampered decision-making at the Gulf state's sovereign wealth fund.

Rowdy scenes broke out after the vote, supported by 32 out of 63 lawmakers in attendance including 50 elected members and government ministers.

The session had gone ahead despite opposition lawmakers once again occupying seats reserved for ministers, a tactic they have used in recent weeks to highlight their demand to question the prime minister over a host of issues including corruption.

"Our problem is not with the budget, it is with the government," opposition MP Abdulaziz Al-Saqabi said.

Although the emir has the final say over state matters, Kuwait is the only Gulf monarchy to give substantial powers to an elected parliament, which can block laws and question ministers.

Speaker Marzouq al-Ghanim had called the special session to debate the budget at a time when the OPEC nation is trying to boost state finances and support an economy that shrank 9.9% in 2020 due to low oil prices and the coronavirus pandemic.

The budget, proposed by the government in January, had projected 23.05 billion dinars ($76.65 billion) in expenditure for the fiscal year that started on April 1, and a deficit of 12.1 billion dinars.

"We have the right to request a special session because all regular sessions have been disrupted," Ghanim said, referring to opposition tactics. In a special session, the prime minister cannot be questioned.

Ministers stood at an entrance to the hall after MPs took their seats and some lawmakers had rapped on tables to try to disrupt the discussions.

Frequent rows between the government and assembly have over decades led to successive cabinet reshuffles and dissolutions of parliament, hampering investment and reform.

Lawmakers want to question Prime Minister Sheikh Sabah al-Khalid al-Sabah over the constitutionality of a motion passed in March delaying any questioning of the premier until the end of 2022 along with other issues such as corruption.

The deadlock appears to have spilt over to the Kuwait Investment Authority (KIA), the $580 billion sovereign wealth fund, where a new board has yet to be named since the existing board's tenure expired in April, three sources said.

One source said the delay, first reported by Bloomberg, was likely "collateral damage" of the political row.

KIA - which did not immediately respond to a request for comment - manages the Future Generations Fund, a nest egg for when oil runs out, and the General Reserve Fund, a smaller state fund used to plug the deficit.

"The issue may affect the Future Generations Fund's purchase of the assets of the General Reserve Fund. This mechanism for financing the budget may stop," said a government source.

That mechanism provided billions of dinars last year to cover the fiscal shortfall.

KIA's overseas investments could also be impacted, said a source close to the fund.