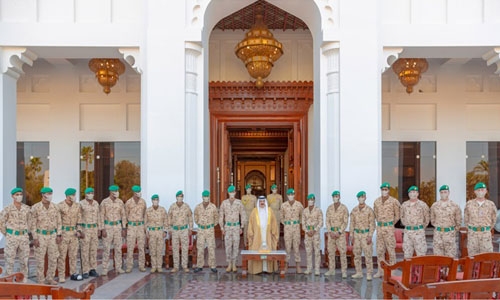 HH Shaikh Nasser bin Hamad Al Khalifa introduced to HM the King members of the Royal Team following their historic success in reaching the summit of Mount Everest in the Republic of Nepal.

Royal Guard team commander Major Mohammed Hamad Al Khalifa first delivered a speech in which he thanked HM the King. He expressed deep pride at being honoured by HM the King, hailing royal support to all Bahrainis across all fields.

He described royal support as a catalyst for citizens to be more determined, brave all challenges and accomplish more landmark achievements across all fields, expressing the Royal Guard readiness to assume all duties.

HM the King expressed thanks to Bahrain champions and congratulated them on their world achievements, which adds to other landmark national accomplishments across all fields.

“Your inspiring achievement is a source of motivation for Bahraini youth to attain more accomplishments”, said HM the King, adding that the message of the Kingdom of Bahrain from the highest global summit is to spread peace and security to the whole world.

He praised the courage and strong determination of the members of the Royal Guard team which contributed to their achievement and success in hoisting the Kingdom’s flag on the highest mountain summit in the world.

He expressed his appreciation and pride for the Royal Guards’ efforts in the Bahrain Defense Force with their valiant colleagues to protect the homeland and preserve its unity, gains and development strides.

He praised the team’s humanitarian works during his stay in the Republic of Nepal, which reflects Bahrain’s keenness on bolstering the bonds of human tolerance and fraternity.

He extended deepest thanks to the friendly Republic of Nepal for the warm welcome and hospitality which reflects strong relations of cooperation and friendship binding the two friendly countries and peoples.

HM the King bestowed the Bahrain Order on the members of the Royal Guard team in recognition of their historic achievement and directed to issue a special stamp that commemorates this national milestone.