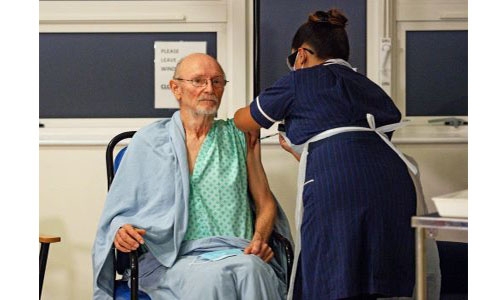 Coventry councillor Jayne Innes, a friend of Mr Shakespeare, said he had died on Thursday and added the "best tribute to Bill is to have the jab".

Mr Shakespeare had worked at Rolls-Royce and was a parish councillor.

The 81-year-old, who had served his local community in Allesley for more than three decades, died of a stroke, University Hospitals Coventry and Warwickshire NHS Trust said.

Mr Shakespeare, who had lived in Brownshill Green, was an inpatient on the hospital's frailty ward at the time of his first jab, and said it had been "wonderful".

In a tribute, released through the trust, his wife, Joy, said: "Bill was so grateful for being offered the opportunity to become one of the first people in the world to be given the vaccine.

"It was something he was hugely proud of - he loved seeing the media coverage and the positive difference he was able to make to the lives of so many.

"He often talked to people about it and would always encourage everyone to get their vaccine whenever he could."

As well as his wife of 53 years, Mr Shakespeare leaves their two adult sons and grandchildren.

He was a talented photographer and loved all kinds of music, especially jazz and regularly attended gigs to take pictures of the musicians.

"Most of all he was a wonderful husband, father and grandfather, nicknamed Pop Pops by the grandchildren. He left a huge imprint on everyone who knew him and will be greatly missed."

Ms Innes wrote in a post on Facebook: "Bill will be remembered for many things, including a taste for mischief."

She said he had always been proud to be from Coventry and had served as a governor at Allesley Primary and Coundon Court schools.

West Midlands Labour group said on Twitter: "Bill made global headlines as [the first] man to have Covid vaccine.

"His decades of service to the party were recently recognised by Keir Starmer.

"Our thoughts are with Joy and Bill's family and friends."

Councillor Angela Hopkins said Mr Shakespeare had helped her when she had campaigned for the Bablake ward.

"He was very thoughtful and always, in his work as a parish councillor, very much putting forward the concerns and views of the residents in his area," she said.