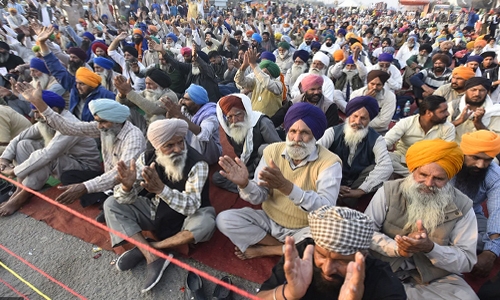 A day after violence broke out during a tractor rally in various parts of the Indian capital, security has been heightened at the Red Fort and Singhu border (Delhi-Haryana border), where farmers have been protesting against agricultural laws for over two months.

A large number of security forces has been deployed at the protest site.

Wazir Singh, a farmer from Punjab’s Amritsar, said that the farmers’ tractor rally was successful and he would return to his home only after the withdrawal of farm laws.

“Our tractor rally was successful except for minor incidents of violence at some places. We are here to protest against farm laws. We are not protesting for Punjab only, but for the whole country. We are not here under any pressure. We will go home, once these laws are withdrawn by the government,” Singh said.

Elaborate security arrangements have been made near the Red Fort where a group of protestors climbed to the ramparts of the fort and unfurled flags on Tuesday.

Farmers broke barricades to enter Delhi and indulged in vandalism across several parts of the national capital during their Kisan tractor rally organised to protest against the new farm laws.

More than 100 police personnel were injured, with several public and private properties being damaged, said the Delhi Police in a Press release.

With another first information report (FIR) being registered at the IP Police Station, the total number of FIRs rose to 22, said the Delhi Police.

A case has been registered against unknown protestors, including the farmer who died after his tractor overturned.

The police had released CCTV footage showing a protesting farmer dying after a tractor rammed into barricades and overturned at ITO.

According to sources in the Delhi Police, the process of filing the FIRs started last night and “over 100 Delhi Police personnel were injured during the farmers’ tractor violence at different locations in the national capital”.

“The first task is to register criminal cases in each incident of violence and hence multiple FIRs will be filed. Once an FIR is filed then the process of identifying the suspects will start. Conspiracy to carry out violence needs to be supported with evidence,” a source told ANI.

Police said protesting farmers did not follow the marked route for their tractor march on Republic Day and forcibly entered central Delhi by removing barricades.

Farmers have been protesting on the different borders of the national capital since November 26 against the three newly enacted farm laws — Farmers’ Produce Trade and Commerce (Promotion and Facilitation) Act, 2020; the Farmers Empowerment and Protection) Agreement on Price Assurance and farm Services Act 2020 and the Essential Commodities (Amendment) Act, 2020.