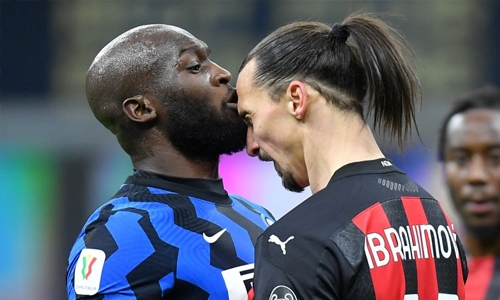 Inter Milan came from behind to beat AC Milan 2-1 Tuesday in an Italian Cup quarter final that saw Zlatan Ibrahimovic dismissed after scoring the Devils' opener.

Ibrahimovic was ruthless on his first chance, firing low off the left post after entering the box on 31 minutes and was dismissed on 58 before Romelu Lukaku levelled from the spot, dpa reported.

Lukaku had a taut effort saved at 0-0 and on 45 had a bitter confrontation with Ibrahimovic, which led to a caution for both players; the Nerazzurro will be suspended in the first-leg semi-final for accumulation of bookings.

A foul on Nicolo Barella led to the equalizing penalty awarded on 71 after video review as Inter stepped up their pressure.

The referee also exited with a pulled muscle and was replaced by the fourth official with 10 minutes left at the Giuseppe Meazza where Inter substitute Lautaro Martinez and Lukaku were denied by Ciprian Tatarusanu.

The Romanian keeper, who was filling in for the suspended Gianluigi Donnarumma, stood no chance when substitute Christian Eriksen curled in a winning free kick seven minutes into stoppage time.

“Milan are a strong team, but we showed to be at their level, actually even better, and we hope to continue to show it in the long run,” Barella said as Milan top the Serie A league two points above Inter.

“It will be a nice fight as the league is open. [Milan] are having a great season and we respect them, but we want to beat everyone.”

Atanta and Lazio meet on Wednesday before Juventus tackle second-division SPAL, while holders Napoli are against league newcomers Spezia in Thursday's round closer.