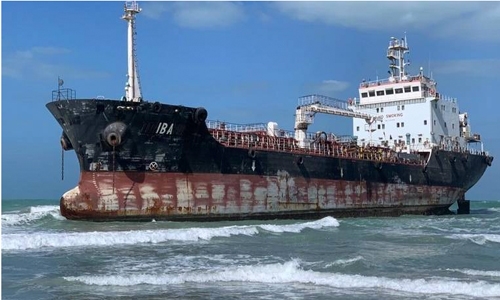 A massive black-and-red ship caught the attention of Umm Al Quwain residents on Sunday morning. They watched curiously as the vessel drifted ashore.

The ship didn’t fly any flag; did not have containers on board; and only held the name ‘IBA’, said Major-General Sheikh Rashid bin Ahmed Al Mualla, Commander-in-Chief of the Umm Al Quwain Police.

The police chief then called an emergency meeting to discuss how the vessel should be handled. Officers looked into the necessary measures that must taken by the company concerned.

“The legal representative of the company confirmed that they are ready to tow the ship as early as possible, and when the weather conditions get better,” the UAQ police said, revealing no further details.