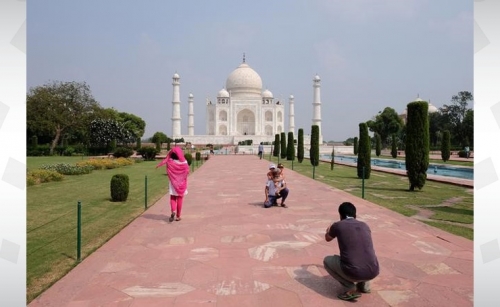 India reopened its famed monument to love, the Taj Mahal, with the first visitors trickling in on Monday, as authorities reported 86,961 new coronavirus infections, with no signs of a peak yet.

A Chinese national and a visitor from Delhi were among the first to step into the white marble tomb built by a 17th-century Mughal emperor for his wife when it opened at sunrise, ending six months of closure, according to Reuters.

Daily visitor numbers have been capped at 5,000, versus an average of 20,000 before the pandemic. Tickets are only being sold online, with fewer than 300 bought on the first day.

Visitors will have their temperatures taken and must adhere to advise to keep a safe distance from each other.

“We are following all COVID-19 protocols,” said Vasant Swarnkar, superintendent of the Archaeological Survey of India, which oversees the Taj in the northern city of Agra, among other historical monuments.

India’s coronavirus tally of 5.49 million infections lags only the United States with 6.79 million, a figure the South Asian nation could overtake in the next few weeks at its current rate of increase.