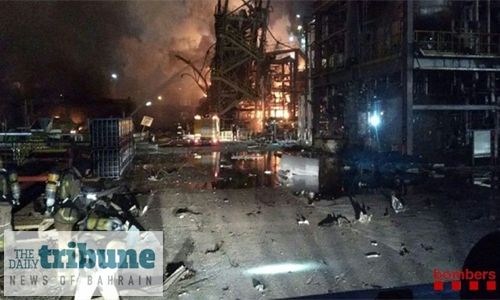 Rescuers found a body at a chemical plant in northeastern Spain on Wednesday, raising to two the number of those killed when an explosion ripped through the facility, triggering a massive blaze which raged through the night.

Catalan regional interior minister Miquel Buch confirmed the latest death, saying a body had been located under the rubble at the site on an industrial estate in La Canonja, just outside the northeastern port city of Tarragona. Spain’s civil protection authority identified the victim as “an employee at the plant” reported missing on Tuesday.

Hundreds of firefighters battled through the night to try and contain the blaze which erupted just before 7:00 pm (1800 GMT) on Tuesday. Dramatic footage of the moment of the explosion showed a huge fireball lighting up the horizon, causing the ground to shake.

One person died when a sheet of metal flung into the air by the force of the blast crashed into a house several kilometres away in the Tarragona suburbs, the Catalan government said. Two others at site were rushed to hospital with severe burns, rescuers and local officials said, while one person sustained less serious burns and five others were lightly injured.

No warning for residents

Buch said firefighters were still trying to put out the blaze but that the situation had stabilised. “There is material there that is burning and needs cooling down so we can’t say yet that it’s over,” he told reporters, saying the region had declared two days of mourning for the victims.

The regional fire service said some 30 fire engines had been working to try and contain the inferno and cool down the propylene oxide tank at the IQOXE facility, which specialises in the production of ethylene oxide, glycol and propylene oxide. But local residents said they had been left in the dark about the blast, saying the warning sirens had not been activated.

“We didn’t know what was happening! We called 112 (the emergency services) and they... said they didn’t know anything,” Tarragona resident Mabel Martinez told Catalan public television TV3. “I also thought it was shocking that the sirens never went off.”

The deputy head of the region’s civil protection division accused IQOXE of dragging its feet in providing details about the incident, which led to delays in warning the public.

“The (emergency) protocols were not followed,” Sergi Delgado told Catalan radio RAC1, saying IQOXE had not provided the necessary information for emergency workers to evaluate the situation and about whether there was a toxic cloud. “This led to delays.”

But Jose Luis Morlanes, director general of IQOXE, insisted the company -- whose products are used in antifreeze fluids, dehumidifiers, detergents and cosmetics -- had done nothing wrong.

He said it was not immediately clear what caused the explosion which took place inside a storage tank with a capacity for holding 20 tonnes of ethylene oxide that was located in a section of the plant that only began operating in 2017.

Although the substances at the plant were highly flammable, they were not toxic, with firefighters and the civil protection authority saying no toxicity had been detected in the surrounding area.