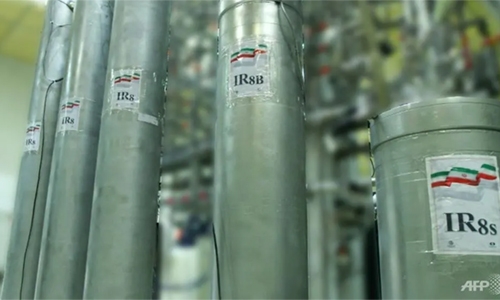 The UN nuclear watchdog yesterday urged Iran to explain the presence of uranium particles at an undeclared site, as a landmark deal aimed at curbing Tehran’s atomic activities threatens to collapse. The International Atomic Energy Agency (IAEA) said in a report made public last week that its inspectors had “detected natural uranium particles of anthropogenic origin at a location in Iran not declared to the agency”.

The agency’s acting head Cornel Feruta said IAEA and Iranian officials would meet in Tehran next week to discuss the matter, adding that the UN body had not received any additional information. “The matter remains unresolved... It is essential that Iran works with the agency to resolve this matter promptly,” he told IAEA member states at a meeting of the agency’s board of governors. A diplomatic source said that the IAEA would send a high-ranking technical delegation to Iran next week.

The particles are understood to be the product of uranium which has been mined and undergone initial processing, but not enriched. While the IAEA has not named the site in question, diplomatic sources have previously said the agency asked Iran about a site in the Turquzabad district of Tehran where Israel has alleged secret atomic activity in the past. Sources say the IAEA took samples from the site in the spring and that Iran has been slow in providing answers to explain the test results.

On Monday, the IAEA confirmed Iran’s stock of heavy water for reactors has surpassed the 130-tonne limit set under the agreement. Heavy water is not itself radioactive but is used in nuclear reactors to absorb neutrons from nuclear fission. Heavy water reactors can be used to produce plutonium for nuclear weapons as an alternative to enriched uranium.

The IAEA has also said one of its inspectors was briefly prevented from leaving Iran, calling her treatment “not acceptable”. Iran has cancelled the inspector’s accreditation, saying she triggered a security check at the entrance gate to the Natanz enrichment plant last month. The IAEA has disputed the Iranian account of the incident, without going into details.