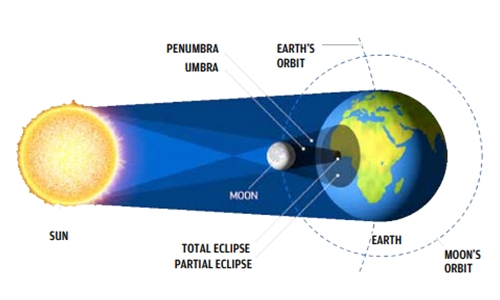 Come next month, and all of us here in Bahrain will get treated to a rare phenomenon which the universe has been doing, right before our eyes, for centuries. While it inspired curiosity in some, it has caused fear in several others throughout history. There is also countless myths, legends and superstitions associated with this celestial magic.

Eclipse, we call it.

People around the world have come up with many tales to explain this magical experience that happens somewhere on Earth once every year or two. Next month, on 26 December 2019, this rare phenomenon will be visible to people in Bahrain.

As Krupp, the director of the Griffith Observatory says, “It’s the solar system doing its thing right before your eyes, and it’s a deep and personal pleasure.” In Manama, this will be a partial phenomenon. But, as eclipse chasers say, it’s an “event to experience at least once in a lifetime”.

So, better, be ready.

The phenomenon, described as a time of coming together and resolving old feuds and anger by Batammaliba people in Togo and Ben, will start in Bahrain at 5.32 am below the horizon at a direction of 110 degrees and -11.2 degree altitude. According to time and date.com, the maximum eclipse will occur at 6:36 am when the Moon is closest to the centre of the Sun in the East-southeast direction (117 degrees and 2.2-degree altitude).

The spectacular sight will come to a close at around 7:49 am as the Moon leaves the Sun’s edge. The total duration of the partial eclipse will be 2 hours, 16 minutes and 56 seconds. However, the annularity, where a ring of fire alone is visible in the sky, can only last for less than a second to over 12 minutes. This happens because Solar eclipses are only visible from within the area where the shadow falls, and the closer you are to the centre of the shadow’s path.

This is also the only truly unique combination of Earth and Moon in the entire solar system that can produce this magnificent sight. Astronomers through painstaking studies have found that nearly identical solar eclipses happen after about 18 years and 11 days, but to be able to see the phenomenon is sometimes a matter of luck. Till now, only a small portion of the earth’s population has witnessed this breathtaking phenomenon, let alone enjoyed the thrill of a total one.

This is because in most place and for most of the duration, an annular eclipse looks like a partial solar eclipse. An annular eclipse happens when the moon covers the Sun’s centre, leaving the Sun’s visible outer edges to form a ring of fire or annulus around the moon. But, not all on earth sees things this way. Throughout history, eclipses have always created fear and curiosity in people who began associating it with myths, legends and superstitions.

What is an eclipse?

Many cultures explain eclipses, both solar and lunar, as a time when demons or animals consume the sun or the moon. The disappearance of the sun from the sky created chaos in ancient times. Even today, an eclipse is considered a bad Oman in many cultures. Several pictures it as Sun being eaten or stolen away by some mythical creatures or as a sign of angry of quarrelling gods. In the Middle East, the celestial experience had even stopped a war. On May 28, 585 BC, during the fighting, the day suddenly turned into night.

The eclipse stunned both nations that they declared peace and the fighting stopped. One of the most colourful stories occur in Hindu mythology, where demon Rahu disguises himself as a god to taste an elixir that grants immortality. However, Sun and Moon find what Rahu is up to and report his crime to god Vishnu, who slices off his head before the elixir can slide past his throat. Consequently, Rahu’s head turns immortal while his body dies. The demon’s head continues to move through the sky, chasing the Sun and Moon out of hatred.

Now and then Rahu catches them and swallows, but lack of throat allows Sun and Moon to fall out of the bottom of his head. Thus goes this story. Modern people have also generated their share of misunderstandings and fear regarding eclipses. Perhaps one of the most persistent ones is that there is a danger to pregnant women and their unborn child during an eclipse. Another misconception, experts say, is that people can’t look at the sun when it’s completely covered.

This, however, is partially correct as looking directly at the sun can cause eye damage. “But if the sun is completely covered, it’s okay to look at,” says Jarita Holbrook, a cultural astronomer at the University of the Western Cape in Bellville, South Africa.   But irrespective of what the myths and legends propose, the eclipse is “an amazing experience, even though you know it’s just the moon moving in front of the Sun,” as  Jarita says.