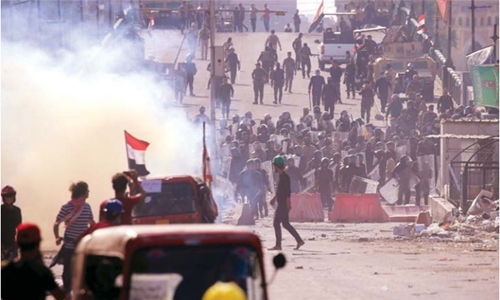 Anti-government protests in Iraq entered their third week on Friday amid fresh bloodshed, but leaders appeared to have closed rank around the country’s embattled premier. More than a dozen demonstrators had died in the capital Baghdad and the southern port city of Basra within 24 hours, medical sources told AFP on Friday.

That pushed the death toll since the first protests erupted on October 1 closer to 300, according to an AFP tally kept as officials have stopped providing updated figures. In Basra, seven protesters were killed in confrontations on Thursday and early Friday, with security forces trying to reopen roads blocked by sit-ins, medical sources said. For a week, protesters have cut access to Basra’s Umm Qasr port, which brings in most of Iraq’s food and medical imports.

In Baghdad, six people died facing off against security forces Thursday, a medical source told AFP. Despite the violence, thousands again flocked to the capital’s main protest camp in Tahrir (Liberation) Square on Friday, including members of Iraq’s influential tribes. “We sacrificed the blood of our tribe’s sons,” said one tribe member who had traveled from the southern city of Nasiriyah. “We won’t stop until the government resigns.”

Meanwhile, Iraq’s top Shiite Muslim cleric urged security forces on Friday to avoid using excessive force to quell weeks of anti-government unrest as authorities grapple with the country’s biggest crisis in years. Grand Ayatollah Ali Al Sistani, who only speaks on politics in times of crisis and wields enormous influence over public opinion in Shiite-majority Iraq, held security forces accountable for any violent escalation and urged the government to respond as quickly as possible to demonstrators’ demands.

“The biggest responsibility is on the security forces,” a representative of Sistani said in a sermon after Friday prayers in the holy city of Kerbala. “They must avoid using excessive force with peaceful protesters.”